We sat on the balcony of the hotel, overlooking a vast expanse of darkness -- so dark that you couldn't tell where the sea ended and where the sky began. Just a solitary star up there. The waves came charging at the rocks with such force as if they were being sent ashore by the broom of a frustrated maid who was trying to empty the water from a flooded room; and the breeze so strong that the full bottle of Smirnoff on the table kept shaking. But right below the balcony, if you looked down, was the brightly-lit road were the weekend Pondicherry crowd milled around.

Soon we would join the crowd to find our way to Satsanga, the French restaurant. But presently it was time for a few drinks in order to be in good spirits by the time it was midnight and my wife's birthday. The most seductive thing about French Pondicherry is its calm: there was calm now, amid the crashing of the waves and the squeals of the holidaymakers, and there was calm then, when we walked down the maze of streets to look for Satsanga. And there was calm again, when we got back to the hotel and had one more drink in the balcony in the company of the waves; the crowd had gone. And then we went to bed, looking forward to yet another trip to calm -- a walk through the French streets early in the morning.

My eyes opened at six. Through the glass doors of my room I saw a deep orange streak running horizontally across the sky. And then the spectacle began unfolding: the orange gradually began to change the black of the sky into deep blue and soon a small reddish ball began emerging from the horizon. The world calls it sunrise.

It was a new day, also my wife's birthday, and also the birthday of Lord Ganesha, the God of new beginnings and the remover of obstacles. Too many coincidences, I thought. So I sat on the bed and let the rays of the sun fall on me. For me, they were messengers of a new beginning and a bright future. I felt good. And calm. At a time when you are desperately seeking peace and a place under the sun, nothing could have been more soothing than those rays.

Here's the sunrise, as seen through my camera: 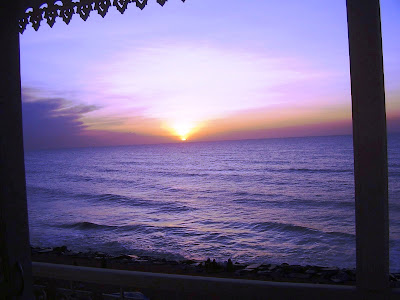 Posted by Bishwanath Ghosh at 12:26 PM

Very well written blog as I can imagine what you must be feeling while enjoying the rays of the sun falling on you. Same happened to me when I was in goa. Sun rays were falling on my face and I was hiding my face because I wanted to sleep more, but I was unable to do so. Finally I woke up. :)

Anyways this picture is very beautiful.

Beautiful pic.
Which hotel is it?