Dragon In The Sky, Touching The G-Spot And Other Stories: Three Years Of Ganga Mail

This morning, I received a compliment about the poem I had posted on this blog a few days ago. The compliment came in the form of an impeccably-worded email -- something very rare these days in the age of instant messaging. The reader said, "You have touched the G-spot of my mind."

That's when I realised that my blog was still alive, and that it had completed three years of its existence on October 17. Three years is a short time, but for me, the preceding three years were life-changing.

The man who started the blog was lonely and a bachelor, who dreaded getting married but at the same time craved for the company of that someone, who was a prince for the first half of the month and a pauper for the rest, who desperately wanted to write books and become famous and be heard by the world, whose job was so cushy that he envied people who were always on their toes and making work-relating calls.

The man who is writing this post might be a loner but certainly not lonely. He is happily married and has a wife who looks after him so well that he doesn't have to move his little finger. He still lives paycheck to paycheck, but gone are the days when we would have to worry about his next meal or drink. He has a job that makes him say, Thank God it is Friday, because Saturdays are his day-off. He is writing a book that just might make him famous. If not this book maybe the next, or the one after that, but at least the fog has cleared off the coast.

But this is the sad part: The man who started the blog would look for excuses to write a post -- even the joy of finding a lost song would transform into a 1000-word post. The man who is writing this post, however, no longer feels the need to write posts. That's because his experiences in the past three years have made him realise that real stories can never be told. They are not meant to be told. Unless you are packing your bags and going to Bolivia or Namibia forever -- certain that you will never return and nobody would ever find you there. But these days, travel writers go just about anywhere. And considering that almost everybody is a travel writer these days, who knows you will come face to face with your character in far-off Bolivia.

But there is one land you can always migrate to and safely tell all your stories. And to travel there, you don't even have to leave your desk. The land is called fiction. It would be silly to waste your time and energy to write a 1000-word fiction for the blog, especially when the blog is read, off and on, by people you are out to fictionalise. It would be as foolish as trying to commit daylight robbery under the nose of a policemen. This should be like stealing two drinks from an already-opened bottle of expensive scotch and putting some water back into it so that the owner never quite makes out that his drink was stolen.

There were many things I had wanted to write about in the past few weeks, but working almost non-stop for 14 hours everyday -- first nine in the office, from 3 pm to midnight, and the remaining five, from 1 am to 6 am, at home working on the book, there is little time to get into the mood for blogging. I wanted to write about my recent trip to Delhi, where I once again aimlessly roamed around Connaught Place after several years, about the trip to Kanpur, where stories are always cooking, about the Manohari Singh's show in Chennai. Manohari Singh was the music arranger for R.D. Burman and the saxophone player for top composers like Shankar-Jaikishen and S.D. Burman. At the show, he played the saxophone -- just as he had done in the original recordings -- for many old hits presented by an orchestra from Calicut. As the finale, he made a solo presentation of Gata Rahe Mera Dil, the song from Guide in which he has played the saxophone -- the one that comes immediately after the mukhda.

I also wanted to write about the fluffy dragon I met in the sky while on my way to Delhi. But since pictures speak better than words, I didn't feel compelled to write anything. Here is the picture I took. Watch it carefully. Who knows, you might be able to spot your dream. 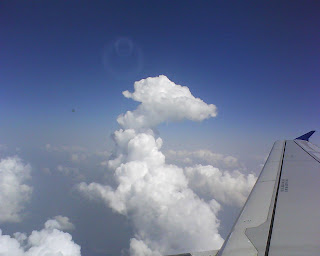 Posted by Bishwanath Ghosh at 1:05 AM 13 comments:

Tell me, will you please?

Tell me, will you please?
That afternoon
when you ran your finger on my chest
what were you scribbling?

Were they circles of satiation
or triangles of guilt?
Or spirals of confusion?
Tell me, will you please?

Maybe you were signing your name,
or writing mine,
or maybe his.
Tell me, will you please?
Posted by Bishwanath Ghosh at 9:04 PM 11 comments:

Wave your magic wand,
turn us into stones.
So that we get embedded
in the walls of Khajuraho.
We can make love in peace
for another thousand years.
The sun would not flinch us
neither would the rain,
and no ugly human
to cry, “What a shame!”
They would only gape and wonder:
“Does this pose have a name?”
Posted by Bishwanath Ghosh at 3:13 AM 15 comments: