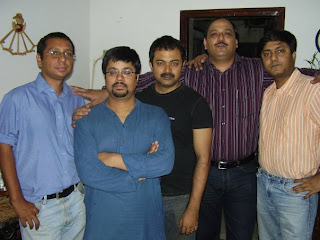 There are times when I entertain morbid thoughts: what if someone whose number is stored in my phonebook -- someone so close that I could dial his number anytime I wished to -- dies? Should I delete the name, knowing that he is no more? Should I keep the name stored, for old time's sake? Or should I deliberately ignore to delete it, in the hope that the name would once again flash on my phone screen someday?

I don't know what I am going to do with Palash's number. Maybe I will just let it be: why bother to delete it when it hardly occupies any space? Or maybe I will delete it: every time I go to the entries under 'P', I would come across his name and get reminded that he is no more.

How can he be no more? I spoke to him only two days ago. And yesterday, when I saw him on G-talk, I wanted to message him asking if he would like to see a poster showing me modelling for an upcoming inter-department badminton tournament organised by my office. But then I thought, why bother him with my vanity.

This morning, Palash Kumar was news. He had become the journalist to be killed in a road accident near Alwar in Rajasthan while driving to the Sariska wildlife sanctuary along with his wife Manisha and their four-year-old daughter Mallika.

I first met Palash on April 1, 1996, the day I joined Asian Age in Delhi under M.J. Akbar. Palash, barely in his mid-twenties, was the deputy chief of bureau, having been promoted to the post after a successful stint in lawless Patna. I remembered seeing his Patna-datelined stories before joining Asian Age, and now I was meeting him in person. Initially, he was snooty, not wanting to mingle with a junior who has just joined. Eventually, alcohol turned out to be the leveller. Every evening, I would give him my share of Rs 35, and the peon would soon return with two quarter-bottles of Old Monk rum: one for him, one for me. Thus began a friendship, and also the tradition of reporters pooling in money to send the peon to get the booze before they started filing their stories.

After work, I would often land up at Palash's place. He would insist that I come because he knew I was hungry. Hungry not literally, but hungry for home-cooked food. So he would feed me with steaming rice, arhar ki daal and ageing pickles that came from his home in Lucknow. In North India, pickles are treated like wine -- the older they are, the better they taste. Then one day, Palash married Manisha, yet another colleague, and soon after, I came to Chennai. The countless days and evenings I had spent with him became part of a mental album.

After coming to Chennai, I thought Palash too would turn into a friend for record's sake. But the bond cut across the Vindhyas and there was never a moment when we were out of each other's lives -- be it the birth of his daughter or my own marriage in 2006. That year, on my way to Kanpur for Diwali, I spent a night at Palash's place in Delhi and caught up with all my former drinking buddies. We took lots of pictures (Palash is in blue kurta) and stayed up all night listening to Kishore Kumar and Palash's favourite, Nusrat Fateh Ali Khan. That was the last time I saw him.

And the last I spoke to him was two days ago. He told me he wanted to shift to Chennai and asked me about the job scene in the city. I gave him a couple of numbers, and told him that things should work out and that we will have a lot of fun in Chennai.

When I got the news, I was in a shopping mall, pampering myself with a new pair of sneakers. I had woken up in the morning feeling unwell, and the more I thought about it, the more unwell I felt. My hypochondria eventually drove me to a nearby pathology, where I signed up for a master health check-up. They took my blood, and then asked me to come again exactly two hours after lunch. So those two hours I spent in the mall, when I got the call. Two things came to my mind. I thought, what's the use buying expensive clothes and shoes whe you could die any moment? And I also thought, here I am, fussing over minor aches and pains, and there, a perfectly healthy man has just had life snuffed out of him!

But before these two thoughts occurred, something else flashed in my mind -- something that happened so long ago that even Palash might have forgotten about it, leave alone me. Sometime in 1997 or 1998, a colleague had invited Palash and a couple of others for lunch. The colleague's mother happened to be a palm-reader, and she cautioned him against a serious accident. I was surprised that this small episode remained stored in my mind even without my being aware of it. In the coming days, many more anecdotes about Palash are going to surface, and I would relive them silently.