Till the age of about 15, I had no preferences in music. If somebody had to ask, What kind of music do you like?, I wouldn't have had an answer. Music, then, was everything that played on the radio and on Chitrahaar, the weekly programme on Doordarshan. Of course, as a boy, one preferred 'new' over the 'old'. The singer or the composer did not matter. I don't know if you are even familiar with the name Vijay Benedict, but there was a time when I liked him, because he had sung the title song for the Mithun Chakraborthy-starrer Disco Dancer. "I am a disco dancer, zindagi mera gaana..."

The song that activated 'love' in me was Gunche lage hain kehne. I was nine years old then, in class four, and every time I heard the song, it would make me pine for a classmate of mine, Sweety. The song is from a movie called Taraana. Sung by Shailendra Singh and composed by Ram Laxman.

In class five, the famous Rocky song, Kya yehi pyaar hai, made me fantasise about another classmate, Vandana. The fantasy would be meeting her in the school field during one of those rare evenings when the setting sun illuminates the sky with deep orange, so deep that you can barely see anything beyond the outline of people's faces. Just me and her. Sex was not even remotely on the horizon then, so the ultimate gratification lay in having her full attention. How desperately I wanted to be Sanjay Dutt. Whoever thought of R.D. and Kishore Kumar! That was 1980.

Soon after, I became an R.D. fan, thanks to Satte Pe Satta, which was released in 1982. The song, Pyar hamen kis mod pe le aaya, made him my God, and he has stayed on the altar ever since. But Kishore Kumar remained just another singer. I liked him, but that's about it.

In 1986, I was appearing for my board exams. I had always found it difficult to study without a source of music being at hand, and now I didn't have to rely on the old Murphy transistor or the Bush tape-recorder (a small slab with just one speaker): my father had just returned from a project in Germany (West Germany, then), and he had got a red, gorgeous Sony two-in-one.

From 4 to 7, my mornings would belong to text-books. At 8.30 am, Ameen Sayani would take over. The famous host of Binaca Geetmala, the programme that kept millions of Indians glued to their radio sets in the 1970's, would, in his inimitable voice, advertise the new releases. The advertisement would be followed by a song from the movie. I would listen to the programme (I forget its name), from 8.30 to 9.30, while doing last-minute revisions, filling ink in the pen, and getting dressed in the school uniform. At 9.30, I would be off for the examination hall, on my bicycle.

One Kishore Kumar song had caught by attention, and I looked forward to it every morning. It was from a newly-released Rajesh Khanna film called Adhikaar, and it went like, Main dil tu dhadkan, tujhse mera jeevan, kaanch ke jaisa toot jaoonga, toota jo yeh bandhan... (I am the heart, you are its beats. I will break like glass if our bond breaks). I taped the song on a blank cassette so that I didn't have to rely on the radio programme, and soon, I was madly in love with his voice. I went back to his other songs, and I didn't have to look hard because in 1987, he died and the market was flooded with his cassettes. I went to the altar, shifted R.D's image a bit and placed an invisible statue of Kishore Kumar there as well. My musical journey had begun. I knew what I was looking for.

The next 20 years were spent on a mission -- a mission that continues even today: to know everything about the two, to collect all their songs, to convert people into worshipping them. Along the way, Main dil tu dhadkan was forgotten, till I found it again, thanks to internet. Nothing gives me more pleasure than sharing music. Not even sex, believe me.

If you scroll down a little, you can see a few pictures that were taken during my recent visit to Mahabalipuram, about 50 km from Chennai. As usual, a couple of the pictures show me -- in one of them, striking a pose at the shore temple, and in the other, smoking a cigarette. The idea for the latter was my wife's: you can see the setting sun almost touching the tip of the cigarette, as if I was lighting it from the fading ball of fire.

Some of the commentators, quite understandably, called me a narcissist. After all, I was posing. But they were fun poses. If I really wanted to keep looking at myself, I would have uploaded pictures of myself staring grimly at the sea in the backdrop of the setting sun. Perhaps with a cigarette touching my lips. I would have looked like an 'intellectual'. Or a 'thinker'. In fact, that's usual my pose in real life: even as I write this post, I am typing only with my left hand (I am a southpaw), while the right hand, which is holding a cigarette, is also supporting my forehead. And the forehead happens to be wrinkled because I am wondering what to write next.

Ok, I've thought of the next sentence, and that is: What's wrong in being in love with yourself? Everybody likes to take a look if a mirror happens to be at hand. People who don't do that are narcissists in other ways. Politicians, for example. They don't look into the mirror 15 times a day because they know what it will show: a rotund, old man. But they can't wait to see their pictures in the papers.

Why do women fall in love with men who possess qualities that they like? That's because they love themselves and want the men to cater to that self. Narcissism! Why does the average Indian man love to have a wife who could also double up as a maid? That's because he loves himself so much that he hates the idea of entering the kitchen. Narcissism! Why does a boss dislike certain people and like certain others? Narcissism!

Everybody in India loves Amitabh Bachchan today, but who was with him when he slept hungry in Bombay's railway stations in the late 1960's? People love his success, not him. Even Jaya Bhaduri would have ignored him if he had not shown the signs of a promising actor. If someone truly loves him, that's his own self. And that's true for every living human being.

Ten years from now, I don't know what will become of me. I could be a successful writer, which I aspire to be; or a failure. In either case, when I sit down to take stock of my career then, I would find myself having a drinking with -- who else, but myself! Ok, the wife might be there. And maybe a couple of friends too. But my most trustworthy companion will be me.
Posted by Bishwanath Ghosh at 10:41 PM 14 comments:

Megalomania and other stories from Mahabalipuram 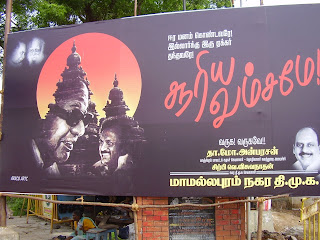 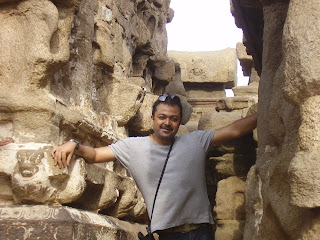 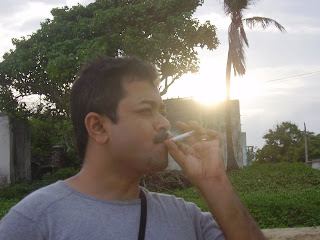 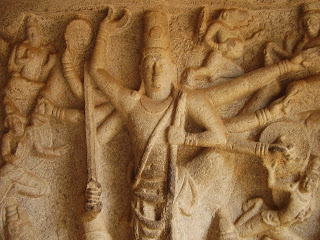 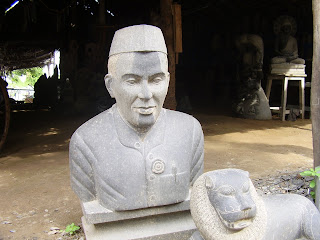 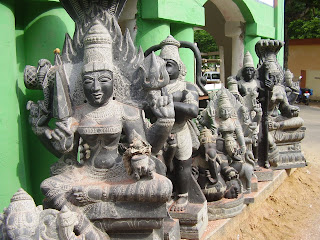