Chai, Chai now available on Kindle and The Nook. 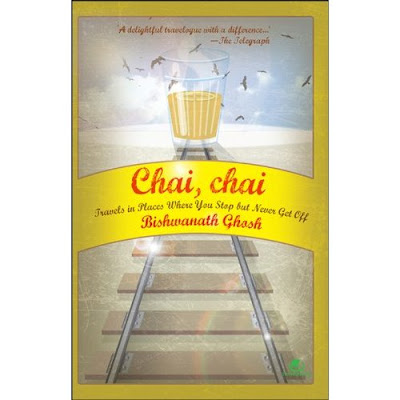 Had to be at Gandhi statue on Marina at six in the morning. So didn't sleep the night. The sun was yet to rise when the heritage walk started. We were to walk down Edward Elliots Road, now called R K Salai, from Gandhi statue to Music Academy. During the walk, learned that once the rich of Madras lived on that road. Most of the bungalows, of course, are gone now and replaced by tall structures with glass walls. Citi Centre was once a timber market. Hotel President is run by Muslims but serves vegetarian food in deference to the sentiments of the illustrious Brahmins who once lived on the road; and the hotel is named so because right across the road lived S Radhakrishnan, the former President of India.

Walked ended at eight. After which went to Triplicane. Had idlis, vada and coffee at Ratna Cafe. Roamed around the streets, saw the old houses. Visited the Parthasarathy temple. Chatted with a few mamis in the temple. Very interesting chat. They told me what it is to be a mami. The sun was rather harsh when I came out of the temple, so took an autorickshaw back home.

Slept for a while. Had some dry fruits for lunch. Took an autorickshaw to Mylapore in the evening. Roamed the streets. Old houses, old shops, the streets coloured with the colours of the fruits and vegetables spread out on jute sacks by vendors. Went to Kapaleeswarar temple.

While I was depositing my floaters before entering the temple, I heard Hanuman Chalisa being played in one of the shops. For the first time, heard a woman sing Hanuman Chalisa. There was something very powerful and persuasive about her voice. Walked barefoot to the shop and asked them for the CD that was playing. The singer turned out to be M S Subbulakshmi. Bought the CD and went into the temple

Had darshan. Placed a hundred-rupee note on the plate held by the priest. Suddenly, he opened the barricade and ask me to come right in -- right inside the sanctum sanctorum. I sat there, on the stone floor, and prayed. Felt good. Shiva and I go back a long way.

Was hungry. So had idlis at Karpagam Mess on North Mada Street. The best idlis I've ever had during my 10 years in Chennai. You must believe me because I love and know my idlis.

Hailed an autorickshaw again. Had barely got into it when I spotted a hawker selling wood apples. The auto driver helped me choose the ripe ones by bouncing them off the ground, much to the irritation of the elderly woman hawker. The driver bought one for himself too. We then set off for T. Nagar. I had finally found what I had been actually looking for all day, though I had not mentioned it to anyone -- not even to myself.
Posted by Bishwanath Ghosh at 1:59 PM 10 comments:

Yesterday, I found myself on a picturesque, breeze-caressed campus by the sea near Pondicherry, attending an outbound learning programme with a batch of colleagues. The programme began with introductions -- each one had to stand up and tell a bit about himself or herself. That's when I realised two things.

One, travelling is the new interest. There was a time when you asked people about their interests, and the answer would automatically and predictably be "Reading and listening to music." Some would add gardening or cooking. That's about it: the lay Indian's hobby was always confined to home. He never thought of looking at the world beyond. But yesterday, about 50% of the people who sat in a large circle under a thatched roof said they wanted to travel, or travel more. That's good news for travel writers.

The second realisation was rather a reiteration, of the fact that I am an outsider. As part of the introduction, we were also required to mention our native places. A large majority of the people, I noticed, had a native place, and they all still lived well within the radius of its magnetic field, almost like the brand ambassadors of those towns or cities.

But I have no native place to speak of. Technically, my family hails from a village called Panchthupi in Murshidabad, the capital of pre-British Bengal, which lies very close to the hamlet of Plassey or Palashi, where the decisive battle between the forces of Lord Clive and the nawaab of Bengal was fought way back in 1757. But my father's generation never lived there. They had long migrated to other places to study or find jobs or do business. My father came to Kanpur, in Uttar Pradesh, in 1966 and settled there. He has lived in no other city since then. I was born in 1970.

So: Bangla may be my mother-tongue, but I am not a bona fide Bengali considering I was neither born in Bengal nor spent considerable time there during the first three decades of my life. I was born in Uttar Pradesh, but I am not a UP-wallah either because I am a Bengali. When I moved to Delhi, Kanpur was 'home', not my 'native'. And then I came to Chennai, and on January 15 will complete 10 years in the city. But that does not make me a Madrasi. Here, I am a 'North Indian' or a 'Bengali'. When I visit Kanpur now, am more outsider than ever, having lived in Chennai for so long. When I go to Calcutta, I am introduced as the man who works in Chennai but hails from Kanpur.

I am the permanent outsider. I belong nowhere, but every place belongs to me. I can make any place home and still write about it with the outsider's eye -- the primary requirement to be a travel writer.
Posted by Bishwanath Ghosh at 2:12 PM 11 comments: