Part of my youth made its journey in an aging Fiat, whose number plate began with the letters 'DIB'. The car belonged to Sanjay Basak. When I first met him, I was 27, he was 37. The place was Delhi. The year 1997.

I remember the first time I noticed him. I was standing with a bunch of fellow reporters at the Parliament House annexe. Some meeting of the Bharatiya Janata Party was on. I saw a boyish-looking man, rather dashing, walk past along with a woman journalist. He ignored our group.

"Isn't that Sanjay?" asked one of the reporters in the group.
"Yes, who else?" said another.
"Then why did he ignore us?"
"Don't you see he has a woman for company? If he had stopped to say hello to us, he would have had to introduce her to all of us." Everybody laughed.

A few days later we were formally introduced. We must have met at the BJP headquarters, immediately after the 3 o' clock press briefing when reporters interact with each other socially over tea and snacks. That very moment, somehow, I knew we were going to be friends: I saw a bit of me in him, and a bit of him in me.

That was the time when the BJP was at the doorstep of power, and L.K. Advani had just embarked on his biggest rath yatra ever, and he was to tour the entire country on his motorised rath in a span of two months. The BJP had opened its purse strings, and journalists wanting to cover Advani's trip were being flown to whichever town or city they chose to report the rath yatra from.

If I had an editor who was kind, I could have easily travelled the length and breadth of the country at BJP's expense, that too by air, and that too when apex fares were unheard of. But my editor was anti-BJP then (only to do a U-turn a few years later) and, moreover, a hard taskmaster, who would rather see me generate special stories from Delhi than faxing a rehash of Advani's statements.

But I found myself on the plane to Calcutta once Advani began his tour of Marxist Bengal. It was unprecedented -- the leader of the saffron party taking his rath right into the red country -- and my boss relented. On the Indian Airlines flight to Calcutta, I had another reporter as co-passenger. That was Sanjay.

I distinctly remember being struck by the humidity of Calcutta the moment we stepped out of the airport. That was my first visit to Calcutta in 10 years. The last I had been there was in 1987, as a 17-year-old who was neither a boy nor a man. I also did not know then that nine years hence, Calcutta would be my hometown-in-law and that the same Netaji Subhas Chandra Bose airport would be almost my second home in that hometown-in-law.

My only hope in Calcutta back then was Sanjay, who knew the city like the back of his hand. But that sultry night, we tamely followed the local BJP workers to a hotel in College Street where we were to be put up. The room was air-conditioned, thank God. So lit up our cigarettes and opened our drinks and went to switch on the AC. That's when we found out that what seemed to be the AC was only the facade of an AC -- merely a showpiece to give an AC-look to the room. Fortunately, we also found out that quite a few reporter-friends from Delhi had also arrived in Calcutta and were staying in adjacent rooms. We called them over and had a party of sorts.

The next morning we drove down to the city of Burdwan (or Bardhaman), where Advani was supposed to arrive after touring Orissa and other parts of Bengal. Instead of waiting for him to reach Calcutta and make a speech, we wanted to catch him in action. We drove all day, first to Burdwan and then beyond: the idea was to run into his motorcade and then follow it back into Burdwan. It was a cloudy day and I remember stopping to buy a few bottles of beer and stopping again at a roadside dhaba which, obviously, served hot rice instead of hot rotis.

It had begun to drizzle by the time we left Burdwan behind and went ahead in search of Advani's oncoming rath. It was still raining and we were on a highway in the middle of lush green fields when we came face to face with the motorcade. It was Advani's secretary who was at the deck of the rath at the time. The moment the last of the cars had passed, we U-turned ours and followed the rath yatris right up to the PWD rest house where they were making a brief halt.

At the rest house, Sanjay and I caught up with the BJP guys from Delhi whom we knew. They were so gratified to see us (and also by the public response they got in Bengal) that they decided to let us stand behind Advani as he made his grand entry into the city of Burdwan on his rath. Trust me, that was the most adrenalin-pumping moment of my life. It is one thing to be a superstar and be mobbed by fans, but this was a different ballgame. Imagine people lining on the road for hours in the drizzle just to get a glimpse of you, and once you show up, they behave as if they've seen God. They cheer, they cry out, they throw gifts at you. Since we stood behind Advani, we were also part-recipients of the adulation, albeit by default.

When you are an actor, people know that you can at the most entertain them. But when you are a popular politician, as Advani was at least at the time, they believe you have the power to rewrite their destinies. They can do anything for you.

Anyway, the BJP did not last long in power. But my friendship with Sanjay did. It almost did not, actually. Months after I moved to Chennai in 2001, I got an e-mail from a common friend Palash, who said, "Sanjay has blood cancer." I was shattered. I did not have the courage to call Sanjay. I chose to drink myself silly for two nights. What would I tell him if I called him, "So buddy, you are leaving?"

Fortunately, it wasn't blood cancer. Sanjay recovered. I met him during my subsequent trips to Delhi, and privately, we would go down memory lane: the kind of stuff we did together when I was in Delhi too, the car with the number plate "DIB" being the vehicle to pleasure-hunting. The pleasure-hunting was not always pleasurable: one night the car repeatedly broke down while we were on our way to a date of sorts. Two new-found women friends, supposedly respectable but -- till then -- unknown to us, were waiting for us at their home. No mobile phones back then, and the car kept breaking down and I had to push it each time it stopped. Fortunately, the car gave no trouble starting when we eventually escaped from those women, upon discovering that they were not so respectable after all, and found a sizeable crowd from the neighbourhood waiting to confront us at the parking lot.

While our individual adventures were runaway successes -- his more incredible and durable than mine -- our joint adventures always ended as comic failures. The last time I met Sanjay was on the eve of 2004 elections, when we took the train from Delhi to Kanpur and then took a car to follow Advani's rath all the way to Ayodhya (yes, Advani again!). At the hotel in Ayodhya, we invited a French journalist to our room for a drink: she had been accompanying us all the way from Delhi, and one could see she badly needed a drink. Just when she had put her feet on the bed and was beginning to savour her drink, others started trooping in. What was supposed to a be a quiet evening ended as a party of sorts.

So that was the last time I met Sanjay, exactly five years ago. And now, on my recent trip to Delhi, I met him again. But not before I almost lost him once again. Exactly a year ago, while I was in Jolarpet in connection with my book, I got a call from a friend that Sanjay was in a critical state. He had, apparently, contracted a strange kind of malaria during his stay with naxalites in Chhattisgarh and doctors in Delhi had given him only 48 hours to live. I instantly called up Palash, the common friend who had told me about the blood cancer episode years ago, and asked him to find out more and keep me posted. I was certain that I wouldn't see Sanjay again.

Life is strange. Sanjay lived. Palash died -- in an accident -- just a few months after. And it was Sanjay's turn to give me an account of Palash's funeral.

When I met Sanjay two weeks ago, I felt as if I had never left Delhi. Only that the bag of his anecdotes/escapades was now so full that it was on the verge of bursting. He is 48, after all. But am sure Sanjay's bag is made of stretchable fabric -- he can easily squeeze in two dozen more personal anecdotes that are bound to accumulate in the next ten years. And maybe then he will retire?

But it's not just my admiration for his ability to charm woman easily that sustains our friendship. There is a lot more, which can be seen if only one scratches the surface. So here is your chance to scratch the surface. You will not only understand my friend Sanjay better but also me and my love for him. Meanwhile, here's the two of us, in a picture taken on March 14: 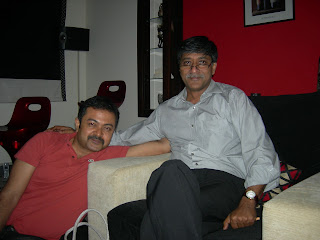 Posted by Bishwanath Ghosh at 11:59 PM

A 'BJP' friendship you guys have here. Hope your friendship lasts forever.

Life has a way of turning the tide unexpectedly! Fiction cannot get stranger :)

certain people meet and we are smitten by their personality and knowledge ,experience and we do learn and grow in their companionship..

I was almost tempted to walk out of anonymity, maybe i will, some day soon..

some of his writings are great others very dark and painful, the person you portray here does not seem the same person in his blog. This is the first time I read his blog and it all is very sad and depressing why?

some people come into our lives and without knowing sweep us away. Some times we ourselves do not know the reason why some people take up so much space in our hearts..God Bless both of you and your friendship...