One Year In Calcutta

On the night of 13 January 2001, I boarded the Tamil Nadu Express at New Delhi station, carrying a large suitcase and a bag. The suitcase had all my clothes and documents, while the bag exclusively contained music: a two-in-one and dozens of cassettes. I was a faceless man — one of the countless journalists seeking sufficient elbow room in the city of Delhi — who had decided to move to Chennai simply because he had not never set foot in that part of the country. I didn’t know a soul in Chennai, and once the train began to move, even my newly-purchased Nokia 5110 lost connection, cutting me off from the rest of the world during the 32-hour journey. I had turned 30 a few days before, but I was born again on 15 January 2001, the day I arrived in Chennai.

Cut to the afternoon of 6 August 2018. I am standing in an empty house in Chennai, waiting for the landlord to arrive so that I can hand him the keys and leave for the airport. All my belongings, accumulated over the 17 years, have already been shipped to Calcutta the day before. I am going to travel light when I take the Indigo flight. In the evening I land at the City of Joy, this time not on a visit but to make a new beginning. I wanted to move before I was too old to enjoy the delights of the place I had fallen in love with during the writing of Longing, Belonging.


Today I complete a year in Calcutta. Despite all the complaints that people — especially those who no longer live here — have about it, Calcutta is indeed a delightful city. Living is believing. That way I am pleased with my decisions. I moved to Chennai at a time when most people considered it back of beyond and therefore got to experience it before it got crowded. And now I’ve moved to Calcutta at a time when most people with my background prefer to live in Delhi, Noida or Gurgaon — with some of the best minds living elsewhere and trying to fit into other cultures, I feel more important. I am a Bengali who made Bengal his home.

But even after spending 12 months here, do I feel settled? Not quite. Feeling settled would mean the death of the writer in me. Even during the 17 years in Chennai, I was frequently spending time in other places — travelling in order to write — so that I did not become accustomed, and therefore blind, to one particular place. Even of the 12 months that I’ve spent in Calcutta, six were spent in Banaras, finishing my next book. No, I didn’t live in Banaras during that period — sitting at my desk in Calcutta, I would mentally transport myself to Banaras between 9 AM and 2 PM every day, before setting out for my office at Dalhousie Square at three o’clock, looking at Calcutta with fresh eyes all over again, my phone always ready to take pictures.

What I find most striking about Calcutta is its lack of ambition. Bengalis are generally happy with what they have — City of Joy, after all — as long as there’s fish in the daily meal. For someone used to the ways of Chennai, it can be irritating as well as amusing to find shops in the neighbourhood — including pharmacies — shutting for the afternoon. Business cannot come in the way of adda or afternoon nap.

During my morning walks in the Central Park, a stone’s throw from my home in Salt Lake City, I always run into Marwari men who are invariably discussing either Modi or Money. Only the other day, I overheard a Marwari gentleman declaring, quite uncharacteristically, to a small congregation under a tree: “Main aap logon ko ek sher sunata hoon” — I am going to recite a sher for you all. Sher means a couplet; emerging from his lips, the word sounded like ‘share’.

On the other hand the Bengalis I come across — almost always elderly and an overwhelming minority in the park — can be heard whining about their health or speaking with pride about their children.

The lack of ambition, in my opinion, helps Calcutta retain much of the old-world charm. In most other cities, you will find the past in museums, but in Calcutta the past still stands on the streets and sits in people’s homes. If you want to see how the world looked or functioned 100 years ago, come to Calcutta — but come quickly, for things are beginning to change here as well. Until just five years ago, trams were a common sight in the city, today you’ll have to be lucky to spot one. But yes, they still run, and I’ve moved just in time before they become memory.

Should I, then, consider August 6 as the day of a third birth for me? No, I have merely relocated and not been reborn. The day of rebirth shall remain January 15, for it was in Chennai that I learned how to look and feel. 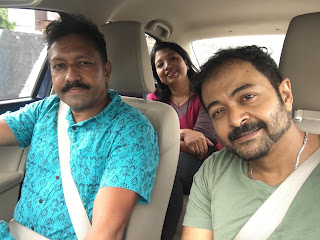 Posted by Bishwanath Ghosh at 11:34 AM

A very relatable and true description of Kolkata any person who has been there will agree with you as it is really the city of joy.

Hello Mr Ghosh
I was in Calcutta some time back for my AIIMS medical entrance as in those days it was held only in major cities. I was staying with my uncle at Andul in the outskirts of Calcutta. On my way to the exam center, I could hear sounds of harmonium, tabla and people singing. I saw girls going to school wearing white and blue paar saree.The girls were riding bicycles with blue ribbons tying the hair neatly.
Now its been 2 decades I have worked in New Delhi and Bangalore, however never saw this kind of simple yet full of gumption attitude. Your article transported me to the roads of esplande, the victoria memorial, the metro, the science city and phoochka .I can not compare cities as a novelistic portrayal but definitely calcutta is city of joy. The joy of music, food, football or the novels all in one place.

Well written....i have never been to calcutta but would love to visit someday..... loved your article