When I Feel Ashamed To Be An Indian

I am usually proud that I am an Indian, and that I live in India, a country of emotional, sentimental people; a country where people don't just live but also look for the meaning of life. A country where the spiritual and the material coexist in equal strength.

But there are moments when I feel deeply ashamed to be an Indian. Moments that make me wish I lived elsewhere, in a country where prime ministers and chief ministers were not always doddering septuagenarians or octogenarians, where ministers were not always keen on leaving sufficient wealth for their grandchildren's grandchildren to live in comfort, where politicians were sensitive enough to put an arm around the shoulder of a flood victim or embrace the son of a bomb-blast victim, where television channels showed adult films instead of 'breaking news' (you can never be bored by the sameness of watching a pair of breasts as long as they belonged to different women, or if the same woman made an appearance at different times; but to watch the same footage for hours on end and listen to hysterical anchors -- that's torture!).

However, what made me feel ashamed to be an Indian most recently had nothing to do with what's happening in India, but what happened in faraway Norway, where nearly 100 people died last week at the hands of a mass killer. Since I don't watch television except while having lunch on Sunday afternoons(I often finish eating while an interminable ad break is still on), I read about the tragedy in the next morning's papers. Most papers had front-paged the picture of a rather good-looking man moving about in a state of daze (one paper showed him embracing another man by way of consolation).

In fact, I happened to notice the picture first, and thought he was a Hollywood actor, the kind who did a lot of World Cinema. Only when I read the headline and the caption did I realise he was the Norwegian prime minister, who was fearlessly out in the open to console the victims of the mindless shooting. The image made my chest swell with pride, even though I have never set foot on Norway nor do I know any Norwegian. And then I sighed to myself as I lit up the first cigarette of the day: "Will we ever have a leader like this?" 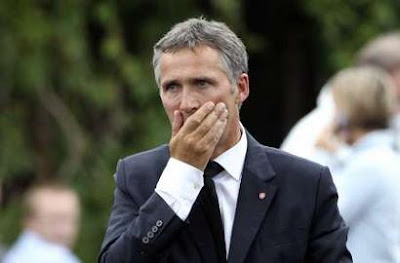 Our leaders only pay visits to hospitals long after a tragedy has taken place, and there they solemnly stand by the bed of a victim or two, their hands joined in front of them (perhaps a way of saying that their hands are tied), and return to New Delhi to resume normal life. They don't know the important of body language -- no matter whether they are inaugurating a project or visiting a hospital to condole victims, they always wear the benign grandfatherly expression. Had the Mumbai kind of blasts taken place in the US, Obama would have been on the spot of the blasts, with his arms around the shoulders of the affected and with an expression in his eyes that the perpetrators of the blast would have read as, "Just wait, I am going to fuck you!"

But then, this is India. Here, people have enormous tolerance levels. And such tolerance levels only help in thickening the skins of politicians. There was a time -- oh, that was so long ago -- when railway ministers resigned after a rail accident. It was not as if the minister's negligence would have caused the accident, but there was something called moral responsibility (an extinct term today) and they owned it up.

But today we have politicians like B.S. Yeddyurappa, the chief minister of Karnataka, who continues to desperately cling to his chair in spite of being slapped with serious charges of corruption and in spite of being asked by his own party to step down. Any self-respecting politician would have stepped down by now and declared: I will not hold public office again until I come clean. But the desperation of Yeddyurappa to hold on to power is evident from the fact that at least during the last several months, he has done little other than visiting various temples in various states to seek divine intervention in his favour. How much more shameless one can get! So as an Indian, I routinely get treated to pictures such as the one produced below. What a shame! 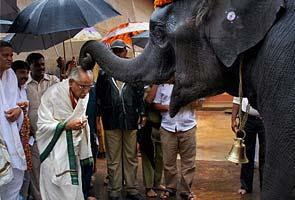 (Since the pictures above were sourced from the internet, that too in the heat of the moment, I am truly unaware of the identity of the photographers or the agency distributing them. I only hope nobody minds the pictures being reproduced here).

Posted by Bishwanath Ghosh at 10:24 PM

Glad you voiced it! Coming back home after so many years, i am saddened that its not true of just politicians in our country although they are the beacons of it!

ours is a poor country,and who wants to keep the nation above self?
so politicians enjoy their time under the sun.money is a great motivator.
eclipsed by some warped mass karma perhaps?
kaliyuga is here.

Democracy is not even about making a correct choice.Power corrupts.
surprised at jagan leaping into politics after YSRs death.
and nepotism in karunanidhi.

Sudeep said...
This comment has been removed by the author.
9:58 AM

So true...guess our country have stopped producing leaders, we have only politicians left, that too produced in excess.

Ghosh, you are incredible. You have this `uncanny' habit of composing your thoughts as well as our thoughts (which often keep criss-crossing everyone's minds) so lucidly that I wonder, if anyone else presents things so obvious in a manner that you do. We all think on the issues in the same way as you do, but its very few like you who put them in a perfect way.

Yes I admit there is a lot to be ashamed of, especially when we look at our political and other leaders but I would like to say here that we should never forget that India is not made up of these people!

And if we keep in mind the average Indian, I would say that there are so many leaders who are doing wonders every day. They are the ones who make me smile and say I am proud to be an Indian :)

Well written Ghosh babu! I felt that you really poured your heart out about the things we all care about. Believe me, you are not alone, as far as frustration with the Indian ruling class goes.

But, at the end of the day, we also have to remember that we elect these people. So, we too, have to share some of the blame.

I believe you too must have come across the (in)famous Hindi phrase
Andher Nagri, Chaupat Raja (In a dark kingdom, the king is insane)? We might be seeing some of that on a daily basis.

Ghosht babu,well written.
India is the largest democracy.It is only a garb for these debaucheries.

Not sure if you have read Roald Dahl...he was Norwegian till he moved to the US.He has written some really chilling dark humour.
Mr.Y is turning out to be such an embarassment. Misery to read newspapers/ watch news :(

That reminds me of what Chidambaram said after the 13/7 attacks in Mumbai. "It is only 31 months after 26/11 that Mumbai has encountered another terror attack of a huge magnitude." I wanted to break my TV set.To hell with people like him and how can I forget the Yeddyurappas who has made India the scam capital.

Agree, totally with it

Brilliant......most sensible writing I have seen in ages!!!

bg, visited your blog after a while. i like the points you have raised and i agree with them completely. but i wish you had not resorted to carnal humour here. just a thought :-)

- your blog visitor from auckland