If you go to my profile page on this blog, you will find the following listed under 'Interests' category (I've cut and pasted):

I started the blog in October 2005, and even though I mentioned "Not necessarily in that order", I strongly suspect there was some logic behind that order. Perhaps it reflected my state of mind at the time. I was not yet 35, still single, and had no complaints against life -- so perhaps it was natural to subconsciously spell out the 'Interests' in the order in which they interested me.

Sex interested me immensely back then, not just as a means of pleasure or conquest but also as a subject. People read you if you wrote about sex -- not titillating stuff, but analysing human behaviour towards it and thus giving voice to thoughts that otherwise remain in the throat. Alcohol was another thing I could not do without, though it was not always Scotch -- a number of posts on this blog during that time were written in the afternoons, under the mild influence of alcohol. Yet, at the same time, I was in touch with my spiritual side and was also totally into yoga, never stepping out of home unless I had done 10 rounds of sun salutations and a few basic postures such as the chakrasana and sarvangasana. Then comes writing. It was a foolish thing to list it under the 'Interest' category because writing was not an interest, but a necessity. It was my bread and butter -- though I did write a lot of stuff out of my interest in writing. Towards the fag end of the list, you will see Travelling, Travel Writing and Fountain Pens. That was because I would occasionally travel to new places and write about them, and was gradually discovering the pleasure in doing so. Most of such writing happened on the spot itself, on the stationery of the hotel or the resort, with my fountain pen. I possessed not more than one fountain pen at a time.

Today, nearly six years later, my interests rank in the reverse order! I now have a collection of nearly two dozen fountain pens (excluding those I've lost or given away over the last few years) and am in the process of adding to it. My latest acquisition is a Ratnam pen. Mr Ratnam of Rajahmundry started manufacturing fountain pens way back in 1932 after Mahatma Gandhi gave a call against the use of foreign-made goods. Subsequently, a number of illustrious men, including Gandhi, have used Ratnam pens. I ordered a pen last month and it arrived within three days of my sending my address to them over SMS. But the pen had a defect: it would suddenly stop writing. When I called them up to convey the problem, the man who answered the phone advised me to dip the nib portion of the pen in water for an hour. I did as advised, but it didn't work. Quite magically, the very next morning, Mr Ratnam's son, Mr K.V. Ramana Murthy, who now runs the family business, called me. He apologised for the defect and asked me to send the pen back, along with a few lines in my own long hand so that he could also craft the nib according to my style. Once again, I did as advised. The pen came back to me in three days, along with a letter from Mr Ramana Murthy (produced at the bottom of this post). Suffice to say that if that pen were a woman, I would have married her right away -- that I already have a wife would not have mattered.

Travel Writing and Travelling would figure next on my current list of interests, considering that's what I am occupied with these days -- no longer for the pleasure of it but professionally, in order to earn my place under the sun. These two interests, by and large, define what I am today and tomorrow could well be my identity. Pleasure, by the way, has long been replaced by pain.

Spiritualism and yoga -- they are now like former girlfriends who you still desire and eagerly want to get back to, but you just can't figure how. As for sex -- oh, who cares! Today I pity people who still think that sex sells, and can't be bothered anymore about analysing or dissecting people's hypocritical attitude towards it. Sex is not something to be written about, it is meant to be had. Either you have it, or don't have it. Go have it if you can -- take the keys to my flat if you want to -- but leave me alone, at least for now.

Perhaps I was wise enough back then to know that interests can change with time and circumstances. Maybe that is why I took care to mention, "Not necessarily in that order." I am equally wise even today not to delete that line, because you never know. 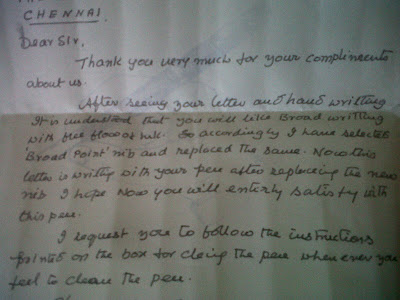 Posted by Bishwanath Ghosh at 11:45 PM

BG, Interests do change with times like priorities. But, we remain the same person as we were as children. It is important to check that the bitter experiences do not change our core. Interests are passing.

I love the honesty and the 'two hoots attitude' in this post!

Nice post. In one place you have mentioned that "It was foolish thing to list it under the interest category because writing is not an interest but a necessity". I dont see any foolishness about it. If your profession and your personal interests are same that is the best match, after all from childhood we study so that one day we can pursue our dreams which comes from our interests.

Tell me how can i gwt that pen.

When I think of the term writing, and the high regard I have for it. I think of you. Thank you for instilling this love for profound writing in me. You deserve that pen. I only wish I had been able to commission it for you.

Suffice to say that if that pen were a woman, I would have married her right away -- that I already have a wife would not have mattered.

If you have a way with words, you can always be in a menage-a-trois . With the woman that tries to put the words in your mouth, and the pen that helps you spit them out. Literally.

Your post has a new dew leaf to cherish everytime...
You have loads of creative juices in you...just that you dnt spill it out for us to relish these days...
Good one !

It will be helpful, if you can tell what pen you bought and how to get it. I like to get a good fountain pen and my experince is close to zilch in it.

Love this one, read something after almost a week. Realsied that I was reading all posts far too quickly, din't want to exhaust the treasure just yet. It's nice to discover a hidden gem once in a while.