1. When you give a Rs-500 note to the shopkeeper to buy a packet of cigarette worth Rs 94 and when he returns the change to you, which includes four Rs-100 notes, you somehow feel he is giving away some of his own money to you. Just like you feel richer when see you find four Rs-100 notes in your wallet instead of just one Rs-500 note.

2. It is more pleasurable to smoke a cigarette when you walk up to the shop to buy a packet, compared to lighting one that is already in your pocket.

3. I dislike sharing my cigarette, and hate it when someone extends two parted fingers seeking a drag. Though I don't tell him or her that I dislike it, because the person is usually a friend.

4. I absolutely dislike it when men leave their saliva behind after taking a drag from your cigarette. As for women: be my guest.

5. One should let smokers be, as long as they are not blowing the smoke on your face. Or as long as they don't smoke in the same room. But don't make them look, or feel, like criminals.

6. The lungs of a man running a shop at Nandanam signal or at the Pondy Bazaar-Mount Road junction would be no better or worse than a regular smoker. He smokes non-stop even without lighting a cigarette.

7. As an adolescent, I hero-worshipped models of cigarette ads, Jackie Shroff included. Secretly fantasised about being one someday (perhaps the unrealised dream manifested itself in the profile picture of mine on this blog, self-taken about four years ago).

8. I smoked my very first cigarette at the age of 19 when my parents had gone to Delhi to collect a prize of my behalf for the cartoon I had submitted for a nationwide anti-smoking cartoon contest. I could not go to Delhi because I had exams.

9. It feels so good to light up a cigarette while having a drink. It feels even better to light up after good sex. Heaven is when two red lights glow in a dark room smelling of sweat. 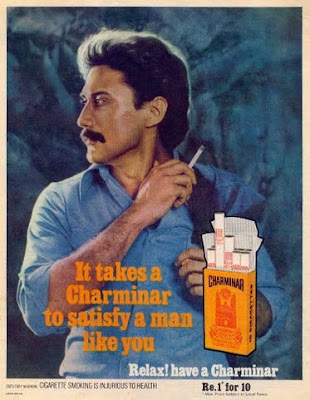 Posted by Bishwanath Ghosh at 9:51 PM

Ah! whiffs of smoke in the air,
Fire is just a blush on the horizon,
And a sheen of sweat trickling on the spine...
Could I be any happier...

//I so envy people who smoke just two cigarettes a day or just one in two days. I don't want to be a non-smoker, I want to be them.
//
..but it would n't work with all

We need not make smokers look like criminals, but i think they should smoke in designated areas and not the non smoking areas. You never know what health issues the person next to you may be having even without smoking, just like the pondy bazaar salesman.

I think, there are 11 smokey thoughts.
Smoker as criminal? A 17 year old boy in my town recently died of lung (yes!) cancer and everyone has been pointing fingers at his chain-smoking dad :(

@2nd comment: Is the name written here 'Raviye'...or sth else? It's longtime I read Tamil.

awesome collection...and the touch of "quit smoking" was nice in the pic...:)

you have a nice smoking style the way you let out that smoke with that faraway look is so endearing.i fell in love when i saw you do that the 1st time.

someone's inspired by your posts

One of my friend's dad was a chain smoker, now at the age of 65, that person has got lung cancer..

No hospital is ready to operate him, they say 65years is too old to do operation and by chemotherapy he is getting weaker day by day.

It really sucks to see some one dying slowly.. Think how your wife and kids take care of you when you are at that condition. More over you have chosen to go to that condition.

I pity your brain which is confident of living life happily without going to a swamy but cigarette.

Bumming a cigarette, borrowing your lighter and not returning the lighter -- death penalty! -LOL


I smoked my very first cigarette at the age of 19 when my parents had gone to Delhi to collect a prize of my behalf for the cartoon I had submitted for a nationwide anti-smoking cartoon contest. I could not go to Delhi because I had exams. - ROFL