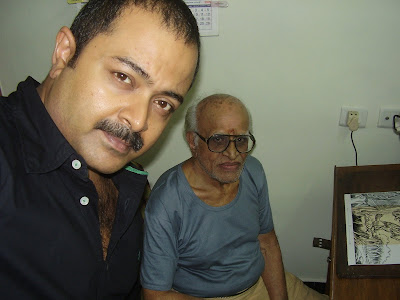 As a child I could draw well. I still preserve the small, red dictionary that I had won as the first prize in a drawing competition at school. When I was 10 or 11, I had written to Chandamama, asking if they needed artists. Of course, I never got a reply. I would spend more time observing the illustrations in the magazine than reading the stories -- the gods and the goddesses, the kings and the princes, the sages and the hermits. I would always look for the name of the artist in the picture, and there came a time when I would decide if I liked a picture or not depending on the name of the artist. One artist I immensely admired was Sankar. I wanted to be like him. Remember the signature-illustration in the Vikram and the Vetala series -- the king wielding a naked sword and carrying a corpse on his back? That was drawn by Sankar sometime in the 1960's, and it still appears in the magazine.

Here's your truly with Sankar, who is now 85 and the only surviving member of the old team of Chandamama. He belongs to the simpler times and is, therefore, a simple man. Old age has taken a toll on his health, but his mind remains sharp and fingers steady as ever: he still draws for Chandamama. For me, meeting him was a childhood dream coming true.
Posted by Bishwanath Ghosh at 10:36 AM

I never thought I will ever know how he looks like.I have spent my childhood admiring his drawings the haunting illustration of Vikram & betaal.

Wow! I remember I used to be fascinated by the illustrations in Chandamama too- there was so much grace and fluidity to the characters and one could almost visualise movement in the pictures...
You're indeed lucky to have met the artist whom most of us associated with magical fantasy! One almost forgets the reality/ the fingers that hold the brush behind the images!

left a longish comment but it seems to hv disapd..

BG, there's also Ramakrishnan who joined Chandamama in the early 1990s after retiring from Children's Book Trust in Delhi and went on to work for Viswamji till last year or so. He must have been 85 then. He is now in Kochi.

For the first time, I can actually say - I am jealous

Thanks Biswanath. You took me back to my childhood. Those illustrations are still imprinted in my mind. Who could forget those drawings of Dakus, kings, princesses, village girls. And during those years I wanted to live in one of those beautiful village houses when i grew up:D

Interesting. I admired chandamama series and illustrations of bethala. I couldn't afford it at that time so used to spend long hours at the library.

I have a question for you Mr. Ghosh. Did you happen to meet him by chance or on purpose. If on purpose, why ? and why now ?

His illustrations of 'chilipi bhootam'-mischievous ghosts, they were always that,never fear-inducing were way too cute. Lucky you.