The King (Of Yoga) And I

Finally, yes finally, I think I can put the hypochondriac in me to death. No more running to the hospital for the slightest of reason. No more Google-searching for symptoms. Whatever will be, will be; and come what may, I am going to return to my full-fledged yoga practice. The days I drink more, I am going to punish myself with five extra rounds of sun salutations. But I am never ever going to neglect my yoga practice, as I've been doing in the past two-three years. I am going to live strong.

These thoughts crossed my mind on Sunday evening as I walked out of the gates of Krishnamacharya Yoga Mandiram, having met the king of yoga, the great B.K.S. Iyengar. He was at the Mandiram to give away certificates to the newly-trained yoga teachers.

It's one thing to chant the name of god or talk about god, and quite another to meet god himself. When you meet god, face to face, all your self-doubts wash away and there you are -- sporting a clean, fresh look, all set to make a new beginning. You realise how impoverished you were all this while.

And if Iyengar is not god then who is: at 91, he doesn't look a day older than 70. He walks around as if he is still 50. He talks with the authority of an Army commander. And he smiles like a child. At 91, you either don't expect people to be alive or expect them to be bed-ridden, completely shrunken, eagerly waiting for death. In fact, by the time you turn 75, you begin counting your days on Planet Earth. That's how it is in India. Perhaps that is why Indian's fall short of Iyengar's expectations: he reserved his admiration for the Westerners.

"In the West, there is still honesty and integrity (when it comes to learning yoga). Indians are yet to open their minds. They have always been afraid of my discipline. They were never prepared to take the hard sadhana," said Iyengar.

You just can't dismiss what he says, for he has seen it all. He has been there, done that. He has been teaching yoga right from the time when even our fathers were not born. In the early 1930s, Iyengar was a sickly boy who often fell ill. But it so happened that he was also married to the sister of Tirumalai Krishnamacharya, the fountainhead of modern yoga. Krishnamacharya, an usually strict teacher, was then teaching in Mysore under the patronage of the local Maharaja, and Iyengar joined him as a disciple in 1934.

Krishnamacharya had another disciple at the time, a poor boy called Pattabhi Jois. At the time, both Iyengar and Jois were terror-stricken by their guru Krishnamacharya, but what bound the guru and his disciples was poverty. They were all poor. They often had no money for food.

In 1936, Iyengar went to settle in Pune to teach yoga. "At the time, you were thought to be half insane if you took up yoga. When I reached Pune, there were barely 10 yoga teachers in the whole of India," said Iyengar. Pattabhi Jois, on the other hand, stayed on in Mysore and founded Ashtanga Yoga, which subsequently became a rage in the West under the name of power yoga, whose practitioners ranged from Sting to Madonna, to name a few. Krishnamacharya, their guru, meanwhile relocated to Chennai. Like a true yogi, he kept a rather low profile, until his son, TKV Desikachar, set up the Krishnamacharya Yoga Mandiram as a way of paying guru dakshina to his father. Krishnamacharya died in 1989, at the age of 100.

By then, both Iyengar and Jois had become world-famous yoga teachers. Jois actively taught Ashtanga Yoga till he died very recently at the age of 94, and Iyengar is still going strong. Now that really makes me wonder about the secret powers of vinyasa. Vinyasa is a dynamic form of yoga in which you keep moving your body in synchronisation with your breath. To explain it to the common man, it is the sun-salutation sequence as prescribed by Ashtanga Yoga.

Whoever practiced Vinyasa seems to have lived unusually long: Krishnamacharya died at 100, and he was mentally and physically agile till he slipped into coma a few weeks before his death. Jois, even at 94, was an active teacher and was perhaps looking forward to a few more trips to exotic islands to teach Ashtanga Yoga when he went into permanent shavasana. And Iyengar, at 91, is still going strong -- and thank God for that.

Iyengar isn't the god of yoga today for no reason. His life stands on two pillars: pain and practice. "Until 1954, I had to struggle. I was teaching in schools and colleges of Pune. But often they would make me wait for hours. At times they would make me wait and then ask me to go home. I took all that humiliation," Iyengar said.

But in 1954, his saviour came in the form of Yehudi Menuhin, the renowned violinist and conductor. He was on a tour of India, at the invitation of Nehru, when he was overcome by a nervous attack -- so bad that he couldn't even hold his violin. Iyengar cured him within a matter of hours, after which Menuhin invited him to teach in Switzerland. "Switzerland was my gateway to the West," Iyengar said. The rest, as they say, is history.

But the humiliations carried forward -- at least for a while. In London, Iyengar walked six miles to and fro to teach Menuhin, and was referred to as a 'slave' by many people. Today, he seeks to make light of the insults: "From a slave I became a slave-driver."

But here's what I will actually remember Sunday evening for -- perhaps for the rest of my life: TKV Desikachar was mentioning about an Army officer who had begun to suffer from vertigo after practising the headstand. "I told him, 'Look, the muscles of your neck have become stiff with age, and if you practise headstand, then..." Desikachar had barely finished his sentence when Iyengar roared in: "Age is an enemy. It confines you to a certain frame of mind, whereas the purpose of yoga is to help you get out of that frame of mind and go far beyond. I was practising yoga non-stop up to the age of 75. At the age of 80, I fell from a scooter and I could not even lift my hands. My students thought my life was over. That was the time when I thought, 'Should I continue or not?' If I had stopped, it would have meant that I had surrendered and lost faith in myself. But I combatted my problems, I combatted my fears. How could I give up something that I had been practising for 70 years? Today, even though I am 91, I can do a headstand for 30 minutes, and trust me, my legs won't oscillate even for 30 seconds."

Moral of his story: either you let age and adversity defeat you; or you defeat them with the strength of your mind and body. The choice is yours. 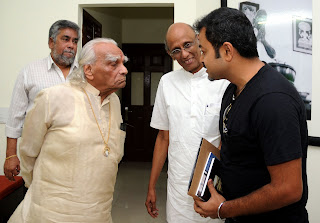 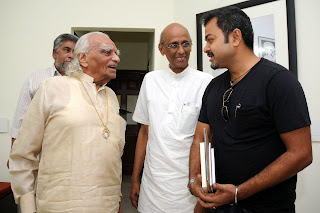 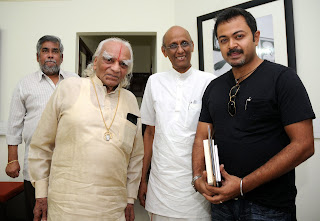 Posted by Bishwanath Ghosh at 1:19 AM

Very true. Apart from helping one defeat age (though I really don't want to live till I am 91!!!) and adversity, Yoga disciplines one's mind -- helping reduce stress and tension. As usual, very well written.

In a broad sense, I guess yoga refers to a disciplined life style.
I feel this way when I see my 90 year old agriculturist grandpa.He has never practised asanas, but, has very regular habits - tough act to follow.

It's a pity many people aren't into yoga in India. It is indeed the best way of keeping fit..

discipline, of both mind and body-oh how the virtue eludes me.

That was a nice writeup on yoga and its masters.
BTW suggest me some good places to buy books online. I am residing in India.

the sequence of the photographs is fantastic. You won him over, didn't you? :)

Enough darling! It's all etched in my mind. The file and books in your hand, the photograph on the wall, his hair sytle, smile, grey hair on your chin..... please move on, I'm waiting.

This blog needs to be more active :-)seriously!

I love these pictures with Iyengar!!!!

This cannot have effect in actual fact, that's what I consider.