"Her surprise was understandable: Mughal Sarai, even though its name gives off a whiff of history, was unlikely to interest anyone unless you have routinely passed its railway station during childhood – a time when you are reading about the Mughal emperors and when names of places inspire larger-than-life images. But Banaras, barely ten kilometers away, is a different planet. Technically, I was standing by a colourless river in a small town in Uttar Pradesh, watching people go about their business. But the moment you identify the river and the town, the earth under your feet becomes worthy of worship. Unlike other places whose history is measured in years, Banaras has defied time: its history is as enchanting as, and entwined with, that of the gods.


If only history had provided mankind with a TV screen and a rewind button to watch what was going on – at exactly the same spot you stood on – on a certain date you clicked on. I pretty much doubt if Banaras would look any different if I were to scan footages through the centuries, but I would certainly have kept pressing the pause button to look out for certain characters – Goswami Tulsidas, who wrote the Ramayana for the layman; or Trailanga Swami, the pot-bellied naked saint who is said to have lived for three hundred years, most of which he spent in meditation either by floating in the river or sitting by its banks; or Allan Ginsberg, the Beat poet, who roamed the ghats in search of god. It is a different matter that I wouldn’t have recognised any of them. The only person I would recognise in Banaras was Ram Ratan, and he was now waiting – impatiently, as ever – for me." 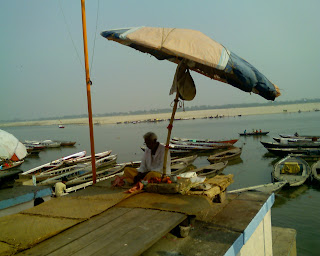 (The picture, taken by me last year with my 1.3mp Motorala which is longer with me, was lying forgotten in a folder)
Posted by Bishwanath Ghosh at 3:00 PM

A very nice reflection. You reminded me of Aldous Huxley's Beneras.

You are tagged and am so curious to know your answers.

Good.
Please give the complete version or source atleast.

Also when shiva himself came on the doorstep of matha annapurni ;) wonderful article!