When Mani Ratnam Said: "You Son of a Bitch" 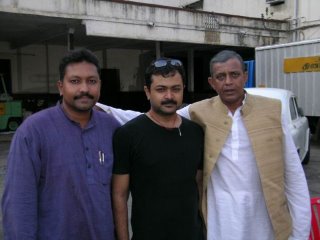 Perhaps it is the ‘uniform’ which Mani Ratnam’s crew wears: T-shirt, bermudas and sneakers. Mani himself wore it, so did his cinematographer Rajeev Menon and a bunch of young assistants. Together, they looked like men from another planet. The sight of the bermuda-clad men greeted me as I sauntered into office this afternoon. They were in the press to shoot for Guru, Mani’s latest project. I had gone on a binge on Sunday, so much so that I had dinner only at 5, as in 5 am this morning. To watch a shooting was the last thing on my mind: all I wanted to do was swallow a dispirin and go to sleep. But then I thought: why not?

I stood at the door of the press and watched, feeling unsteady and unwell. But as I observed Mani, I began to feel better. The man, I am told, has had his share of heart attacks, but he was bouncing around, as if he was wearing springs inside his FILA socks. And his eyes always twinkled, as if he was a 10-year-old. As I surveyed him surveying the press, someone touched my shoulder and said, “Excuse me.” I stepped aside and let the male voice walk in. It was Madhavan. He was wearing a vest and an assistant was presently handing him a shirt. Then another tall man in a white kurta and dhoti, with his short hair painted in silver, arrived: Mithun Chakraborty. The same Mithunda who disco-danced into people’s hearts two and a half decades ago wearing white – not dhoti-kurta but shirt and bell-bottoms and even white shoes. But the hair was black and long.

As soon as Mithun entered the press his assistant handed him a khadi waistcoat. They were ready for the shot. Mithun is a media baron and Madhavan is his son-in-law as well as his reporter. The scene is that of a confrontation between the two where Mithun basically asks Madhavan to get lost.

Ever since I moved to Chennai five years ago, I have seen quite a few film shootings and quite a few Tamil stars: Ajit Kumar, Vikram, Vijay, Sharath Kumar, Ramya, Rambha, Jyothika and a few others whose names I do not know. But they were all action or songs sequences. This was the first time I was witnessing the shooting of an intense dialogue scene. And it taught me two things: 1. You can’t beat experience, and 2. Perfection can be a pain but it is worth it.

When I say experience, I mean Mithun Chakraborty. The confrontation scene was okayed after about half-a-dozen retakes, and Mithunda breezed through each of them. After each time Mani would shout “Cut!”, the former Disco Dancer would stand in front of a pedestal fan and relax. An assistant would give him a piece of cloth and he would dab his face.

But Madhavan had no such respite. Mani, after shouting “Cut!” each time, would walk up to him and ask him to put more emotion in his dialogue-delivery. Not that what Madhavan was doing was anything wrong, but Mani wanted perfection. He would make Madhavan rehearse his lines like a schoolboy after every take. But not once did the director have any communication with Mithun Chakraborty. Mithunda, after all, is no ordinary actor. The masses might know him as the Disco Dancer, but few know that he has won the National Award thrice, including for his debut film – Mrinal Sen’s Mrigyaa. And he hopes to get the fourth for Buddhadeb Dasgupta’s Kaalpurush.

Coming back to Mani Ratnam’s perfection. Perfectionists can have a bad temper and today I witnessed Mani’s. Before every shot, his bermuda-clad assistants would dart around putting the set in order, but it was on them Mani’s temper struck like a thunderbolt. Before one of the retakes of the confrontation scene, a 20-something assistant went around clearing the place. But in the process, he himself lingered on in front of the camera for long enough to arouse the temper of Mani, who had already announced “Ready!” Mani went charging at the boy with a raised palm, as if about to slap him, and said, “You, you son of a bitch! You are spoiling everything.” The boy’s face remained emotionless: he was clearly used to such abuses. After the shot was taken he gently told the boy that he should run out – and not stroll out – of the camera’s view after getting a shot ready. But the next moment he lost his cool with another bermuda-clad assistant who held the clap-board. “You fool, don’t you know how to do it?”

All this while, I had plenty of opportunity to talk to Mithunda but the place was confined and I could not be sure if I was interfering with Mani’s scheme of things. I did not want Mani to call me son of a bitch or something like that. So I went to my cabin and worked for a while.

A little later, while I was going out for tea, I saw another shot being readied, this time in the portico of my office. Technicians were setting up reflectors and lights and a few men were busy yanking off the backdoor of a Fiat that bore a number plate starting with M. Clearly, the movie dates back to a few decades. The door was being pulled out to enable Rajiv Menon to shove in his camera.

While the preparations were on, Mithunda sat on a plastic chair smoking a cigarette. A vivacious and gorgeous colleague, who had already met him before, introduced me. There is one thing I have in common with Mithunda: we are both Bengalis who have taken a liking for the South and are living there. While Mithunda has picked up Tamil, I haven’t. After five years in Chennai, I can only get the drift of a conversation when two Anglicised Tamilians speak to each other. With Mithunda I spoke in Bengali and English, and I could see he was genuinely happy meeting a fellow Bengali in the location.

We chatted for a long time, during which he even gave out the storyline of the film but asked me to keep it to myself, which I will. But I can’t resist saying that Guru is similar to Mani’s earlier film Iruvar, in the sense that it involves real people and real incidents. Mithunda is, to use the cliché, humility personified. “Madam, there is no easy money,” he told my vivacious colleague, “I have been up since 5.30 this morning, and tomorrow at 5 I leave for Kovalam (to shoot for the same movie).”

When Mithun says “no easy money”, he means professionalism, which directors like Buddhadeb Dasgupta and Mani Ratnam recognise. The chat I had with him was really interesting: he even spoke about the Big B and not really in glowing terms. But you will have to wait for the interview – provided Mithun Chakraborty interests you. But take my word: he is an interesting guy.

Above is a picture where I am seen posing with him. I am sharing it with you, but I really feel ashamed. In the picture I look – to use my boss’ favourite expression – “decadent.” On my right is my colleague, M T Saju.
Posted by Bishwanath Ghosh at 2:02 AM

interesting - will look out for the article

Thanks for the interesting narrative, great read...please go have plate of idlis on me....my treat...

Visithra, Prakash and Srikanth: A big Thank You!

Very interesting and nicely written! Will wait for Mithunda's take on Big B !

No wonder Mani is facing so many heart attacks. I hope he takes it a little bit easy but who am I ...

Ishit: Thanks. Mithun's take on Big B will come soon.

Venkatramani: I think impatience is synonymous with genius. :)

That was a nice narration...hope GURU will do at BO which IRUVAR failed to do...keeping my fingers crossed.

Hope this Guru turns out to be another Iruvar, which touched the benchmarks of perfection in film-making.

Hey,
Very interesting! :) And the way you've presented it is excellent!

Hey I'm waiting for Mithunda's interview. To set records straight, Mithunda is not the only one to win national award thrice, Kamal Hassan has won it too.

//I did not want Mani to call me son of a bitch or something like that. So I went to my cabin and worked for a while.//

Not only Mithunda, but KamalHassan and Mohan Lal have won the National Award thrice.

Yagna & Anon: Point taken. My mistake, have corrected it.

While I can imagine bermuda-clad blokes walking around the sets, still difficult to swallow that Mani swears. Maybe that's because I've always associated Madras with completely pithy but extremely polite conversations especially in the workplace. While no one really minded their p's and q's on the sets, I would think swearin in Tamil would have been ingrained. Obviously the place has grown up, as has its vocab.
And yes, Mithun is something. Wish he had chosen better films. Think Mani is overrated.

Oh God! I know. I have two idlis for breakfast EVERYDAY and people at home wonder how I can eat the same thing every waking day of my life. They're not even half as good at the place I get in from every morning - a tiny Udipi joint called Swagat where the 'jain' sambar can turn off even a confirmed idler, but not me. Got myself a packet of MTR chutney powder and I dunk them into it and eat them up quickly.

Mewmatic: I guess all geniuses are a bit impatient because they seek perfection all the time.

And idli and chutney powder is a terrific combo.

Very interesting post. I think Manirathnam is highly over-rated. It is said that a director is only as good as his last movie and in Mani's case, he's been resting on (past) laurels for way too long.

I believe Guru is loosely based on Dhirubai Ambani's life.

Ammani: Perhaps you are right...

This has to be the first authentic report on 'Guru'. I am dissapointed though that he is making it only in Hindi.

thanx for dis info.. i m a ManiRatnam & A.R.Rahman fanatic tat i was starved for news of dis film.. thanx a lot.. but i m disappointed like hell tat he wont b making dis in tamil and i cant understand hindi :((
btw, i will surely wait to c if dis really wud b similar to iruvar...
anyway, thanx for d post....

A good blog Bishwanath, I enjoyed every word of it. Waiting to watch the real actions on big screen.
Well, I have seen almost all the movies of Mani Ratnam and I love the way he crafts the movies. Just to take an example: The first song sequence of Roja, "Chinna chinna aasai", portrays the character Roja and draws the picture of her village and people to the viewers. He is class apart. Every frame of the movie is a pleasure to watch. Waiting for this one too.

Mithun is a legend of Bollywood. No one can be compared with him instead his many films are worst, its not his fault. He is one of the brilliant actor for bollywood of all times.
Nirajan, pokhara, nepal.

It is interesting to see someone like Mani Ratnam losing his temper. It is a sign of a control freak, not a perfectionist. It shows in his films - the plots are by no means universal, and they all run on packaging, not on great cinematic value. No wonder he doesn't enjoy great respect from his worldwide peer group - which is an artist's true measure, not just underexposed Indians going Ooh and Aah over his slick surfacial narratives. (Nayagan is an exception, but someone else should be credited for that great movie)