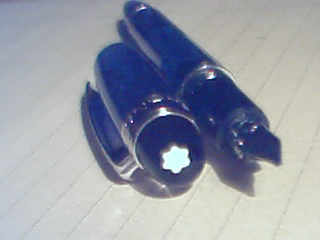 All dressed but nowhere to go: that's the situaton I find myself in very often these days, especially since I bought the laptop over a year ago. A fairly decent collection of fountain pens, a few bottles of ink (black, blue, blue-black and green) and several handful of ink cartridges (Reynolds, Cross and Waterman). But nothing to write.

The nature of my job in Chennai gives me ample time, unlike my Delhi days when you had to rush out to the spot, rush back to office and type out your story, and then rush out again. Even since I came here five and half years ago, till I acquired the laptop, I used to handwrite every story before typing it out in the office. The handwriting would be careful in the beginning, with the opening paras being written and rewritten several times. The style would have to match the ideas: that's when the alcohol was yet to have its effect. With the first kick of the booze, the thought process would get uninhibited and I would start taking liberties with the style: the handwriting would not matter much. After the third drink, the style or the handwriting would not matter at all -- only ideas. They kept coming, I kept jotting. The next morning, I would rewrite most of the stuff while typing on the computer and turn out a rather decent story. No longer. Today I go more by the appearance of a sentence on the screen.

Pablo Neruda once said that writing needs to be done with minimum tools at your disposal. Just a pen and a piece of paper would do. One cannot agree more. When all you have is a pen and a piece of paper, your mind works the most. When you type on, say, Microsoft Word, distractions are plenty -- from the spellchecker to the word counter. You get so caught in technology that you forget to push your mind hard. A stray thought, which could have been immensely useful, risks being blocked like a pop-up just because you are so focussed on the screen.

Back to pens. Fountains pen have always fascinated me. Nothing like the ink flowing smoothly through a thick nib. As a child I mainly used a pen called Usha. It had a transparent body, which kept showing you how much ink is left. It cost, if I remember correctly, Rs 2 or Rs 3. Occasionally, I would be treated to a Camlin, or the Chinese-made Hero. I wrote my class 12 exams with a fountain pen whose brand I can't even recall: it was local-made and must have cost not more than Rs 10 at the time.

By then Reynolds had come, and so did pens with jotter refills. I don't remember when exactly and why I switched loyalties, but for a long period starting from college I used ball pens. Maybe at that point other things mattered more than pens. Then, in 1991, we went to attend my uncle's wedding in Bengal. I carried a camera and took pictures. And elderly relative, who we had never met before, wanted some of the pictures to be sent to him. To write down his address, he took out a fountain pen: a cheap one, but well taken care of. The way the ink flowed made me salivate -- yes, salivate. I returned to my first love.

There are two things I don't like about ball pens. One, the ink-flow becomes uneven after a point. Two, it leaves an obnoxious impression on the back of the page. Roller-balls are fine, but then, you can't beat the bottled ink.

While working in Delhi, the first expensive fountain pen I bought was a Flair President. It had cost me Rs 450 in 1995 (Parker hadn't come yet). That was the best pen I ever possessed: I wrote countless letters and articles with that. (It is still lying somewhere in my cupboard, broken). Then I started buying Parkers. By now I realised that I was not the only one with a passion for fountain pens, and that a good fountain pen was also a statement of style. M.J. Akbar, one of my editors in Delhi, always carried a Mont Blanc in his pocket -- the white star on the cap signifying the superior status of the owner. Whenever he was travelling, he would write out his column, Byline, in longhand and fax it to the office: flawless pieces with no words or sentences struck out.

Mont Blanc, at that point, was out of reach for me: Rs 10,000 in 1996 or 1997. But I kept buying other stuff. I got pens as gifts too, from the dearest ones. Today, my collection is fairly decent: several Parkers, two Hertig, one Lamy, one Cross, two Waterman, one Camlin (for Rs 50, bought in Trivandrum), one Pierre Cardin, and now, one Mont Blanc (a wedding gift by my wife). Another Mont Blanc is on the way, thanks to a very special friend. Isn't life wonderful?

All I need to do now is justify the possession of so many pens by switching off the computer and grabbing a piece of paper. Neruda was right, after all.
Posted by Bishwanath Ghosh at 11:44 PM

Pens!!! If someone asked me how I began writing. I would say for the fancy of a pen. No expensive taste there, a Reynolds or a Rotomac (remember Raveena Tandon prancing in the ad 'Likhte, Likhte Love Ho jaye') would do. If no great idea came, would just write my name or copy some great writing. Due to the physical difficulty, have stopped using pens except for signing. But still fancy possessing them.

Nice post! Made me remember my own fascination with ink pens. The first time i started using an ink pen was in class third. How i waited for that day! Cause that was the day i was going to be presented with my Dad's Parker which i had vied for ever since i started writing.

No, Neruda is worng this time...at least for me. I could never pen-write a story or article...my hand speed is much slower than that of my fingers on the keyboard....my thoughts are too flitting....

And so my pens are for short notes to loved ones and dear friends...

ya there is a certain joy when you put your thoughts to ink on paper. But these days I do not seem to have thoughts worthy of that honour!
Congratulations. My very best wishes for a very happy married life.

Hey, I agree. There was a charm in writing with ink pens. Now I dont write much and every time I need to , end up losing time searching for pens. I dont care for them anymore. If I had an ink-pen I would have taken good care of it. I used to use a Flair pen, the only ink pen I loved. But once they stopped, i stopped using ink-pens. Parkers are just out of my reach.

Jinal: Thanks for publishing it on desipundit. I saw the intro you gave to my post, and was highly impressed by your wordsmithery.

Maya: Pens for short notes and the keyboard for the manuscript -- that's sounds fine. In any case Neruda wrote only poetry: only a few lines at a time! :)

Usha: Thanks for bringing back the warmth to my blog. And thanks for your wishes.

Mahesh: Parkers are quite cheap these days, and they write so well!

Fountain Pens rule the World of writing (or so I would like to think)! With each passing year (duh.. I sound old) there seem to be fewer and fewer people using fountain pens. I can not write well with a ball-point pen. Btw, the HERO pens are now branded as OSRA pens, although your shopkeeper should understand what you pen you want when you say Hero Pen or China pen :-)

Pens are amazing! There was a time I would love the feel of pen moving across paper. That itself was a great high for me. Today, computers have killed that. There is no joy of adding an extra word in that micro inch of the paper or scratching out words or doodling when stuck somewhere.
So many things to be nostalgic about....

Oh, and I take back what I said to in the mail about not writing! ;-)

You brought me back my school and college days.

Ahh... writing on paper and with ink pens... I think the last time I used a ink pen was around 3 years back on my Lab Record.

You know i wrote about my love for ink pens - and salivating over my dads collection some time back. Now you've once again brought it out.

I dare not keep them in my purse - given my tendencies to lose ball pens - one tour agent even kept one for keepsake in kerala.

But i see uve met someone who matches ur interest - otherwise you wouldn't have gotten a mont blanc - cheers to the both of u ;)

ps : she enjoys watching the sliding of the pen from pocket to paper? ;)

I miss the articulate trail of ink my silver sheaffer used to leave across the page. And I loved to watch my words glint in the light before the ink dried. Gave them a delicious ethereal touch.
Now I'm not proud to say I'm a ballpointer. And my prize winning handwriting has degenerated into careless scrawls with unforgiveable loops.
Bring back the fountain pen I say!

I am also crazy about fountain pen. I have Mont Blanc, Watermans, Sheffers, Parkers, Pilot.

This chinese pen is excellent.

Can any one suggest me a good one?

A very good pen to have is made in TENALI near Vijayawada. Its sold under "ASHOKA". The body is made of Bakelite.

If you have a choice, ask for a 'fine' nib on the montblanc. the medium is too thick for our standards and is good only for signing or if you are using very good writing paper, properly glazed and so on..

Using a wordprocessor is much faster than writing, but there is a joy in seeing the ink flow as you put pen to paper. I'm a fountain pen enthusiast myself, but, unfortunately, do not get to use one these days.

i m an architect and a teacher may persons interested in pens send me information on pens made in india for my research..to pitkaryd@rediffmail.com or pitkaryd@gmail.com thanks

mr anup actully OSRA is registered fountain pen jointly deloped by top china factory a specialist fountain pens for india
which is supported by top technology and profesiona design
not as hero
better to watch on www.osrapen.com