Seeds Of The Raj Were Sown Here 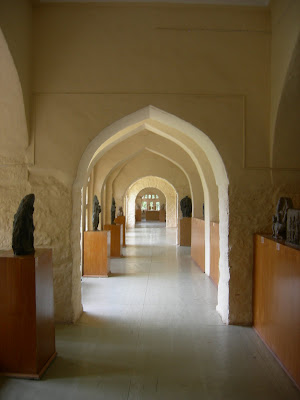 In 1639, the very year Shah Jahan made Delhi his capital city, the seeds of the Mughal Empire's doom were sown in a hill-surrounded south Indian town called Chandragiri, located in present-day Andhra Pradesh.

By then, the powerful Vijayanagara Empire had disintegrated into smaller kingdoms which were now ruled independently by their erstwhile governors, the Nayaks. Chandragiri, which had been the capital of the Empire, was ruled by a Nayak called Damarla Venkatadri, whose authority extended to the East coast, from Pulicat to San Thome. On August 22, 1639, he put his signature on a deed allowing the East India Company to set up business on a strip of beach close to San Thome.

On that sandy strip the Company built Fort St. George, which turned out to be the springboard for British rule in the sub-continent. From Fort St. George also grew the city of Madraspatnam, known today as Chennai, a metropolis bursting at its seams with a population of nearly 10 million. But Chandragiri, where it all began, is a small and contented town of 10,000. Located 12 scenic kilometres from Tirupati, it's bustling with activity, nonetheless.

Bazaar Road, its only main road, is commercial as well as residential — flanked by houses of varying vintage, shops and provision stores and busy eateries. At Murali Haircutting Saloon, which is pulsating with the beats of a racy Telugu song, barbers are snipping away at the hair of their customers even as film star Venkatesh smiles at them from a poster. Vegetable vendors, all women, have their wares spread out on the pavement. The road also accommodates the town's busy bus-stand, police station, a wine shop and two modest lodges. Yours truly spent a night in one of the lodges: an AC room came for Rs. 700. If Chandragiri was Mumbai, it would have been equal to staying at the legendary Taj Mahal Palace.

But few luxuries beat the pleasure of exploring a tiny town on a drizzly night at an unhurried pace, smelling the idlis being steamed by a roadside vendor-couple or watching a masterly chef stationed on the pavement expertly roll out egg dosas. The dosas, which might be the best you've ever had, cost you barely ten rupees. Perhaps the time has come to promote small-town tourism, when you travel to a nondescript town and savour life in slow motion, that too in a princely manner.

Historically, however, Chandragiri is anything but nondescript. The three-storeyed Raja Mahal, where the Nayak is said to have signed the lease, is about a kilometre from the town and attracts a trickle of tourists on a daily basis. It has been renovated and turned into a museum by the Archaeological Survey of India and houses artifacts and bronze statues belonging to the Vijayanagara era. Across a neatly-kept lawn is the much smaller Rani Mahal. There are benches for visitors in the shade of jamun trees — you can't help trampling upon a few jamuns along the way — and a small lake for boat rides. A pleasant place to meditate upon history.

The two palaces are part of the Chandragiri fort, a substantial portion of which lies on top of the overlooking hills. From the lawns of the palaces, you notice fortifying walls peeping out of the vegetation on the steep hills. At certain places, you find the boulders glazed — the idea was to prevent the enemy from climbing up. Alas, the hilly part of the fort, believed to be dating back to 1,000 A.D., is closed to visitors.

"The climb can be very dangerous. We can't allow people for reasons of safety," says G. Thirumoorthy, the assistant superintending archaeologist. So what was up there? "Must be the treasury," he replies. So, a cloud of mystery hangs over the hills. One untested way of clearing the cloud could be to make friends with an enterprising goatherd: you will find a number of them loitering on the foothills.

The two palaces, however, do not give a feel of history. Thanks to the renovation by the ASI, the structures look rather new. The durbar hall of the Raja Mahal, in fact, bears a recent coat of pink. But Raja Mahal, no doubt, is old, very old. "Archaeological evidence suggests that it belongs to the late medieval period," says Thirumoorthy. He, however, laments the lack of archaeological studies done on Chandragiri, considering that it had been a capital of the Vijayanagara Empire (it became the capital after Hampi was reduced to ruins by Muslim invaders during the Battle of Talikota in 1565).

Meanwhile, life in Chandragiri, the town, goes on. Residents don't seem to have many complaints against life. "There are only five pawn brokers in this town, and I am one of them. We are all doing good business. Why should I go elsewhere?" asserts Vishnu Prakash, a pawn broker from Rajasthan who chose to settle in Chandragiri. Why not Tirupati, where business could be even better? "Why should I?" argues Vishnu Prakash, "The cost of living is so low here. Chandragiri is paradise."

Published in The Hindu MetroPlus Weekend, September 30, 2011.
Posted by Bishwanath Ghosh at 2:29 PM

Nice pic.
I once read a historical novel in Kannada. In it, the author theorises that most of the wealth of the Vijayanagar Empire was transported from Hampi & hidden in Tirupathi & Chandragiri just before the invasion.
Am sure, the hills know a lot more than they'll admit!

wow, that is a good one!