In the state of Paschimbanga, a slice of Pondicherry 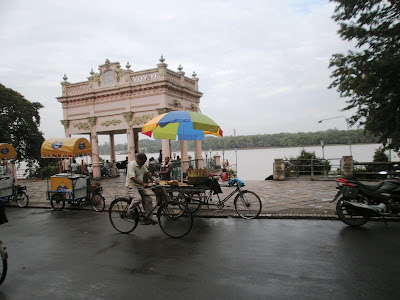 The sun, as it began to set, sprinkled the river with drops of orange; the sky, meanwhile, was rapidly turning into a patchwork of grey and deep blue. A number of elderly men, sitting on archaic wooden benches in groups of twos and threes, were watching the spectacle. For them it was not a spectacle but a sight they came across every day after their evening walks on the Strand in Chandannagar, once known as Chandernagore. But for us it was — and we had made it just in time to watch the sun set over the erstwhile French colony.

It takes roughly an hour to reach Chandannagar from Kolkata, but it took us three. The reason being my two companions got into a heated debate and forgot all about the crucial right turn that had to be taken in order to reach the tiny town located on the banks of the Hooghly. And since the debate, inspired by a new Bengali film called Iti Mrinalini, was about extra-marital relationships, the driver must have had his ear placed on the conversation so firmly that even he forgot to take his foot off the accelerator. The car kept speeding forever on the wide, smooth Delhi Road.

By the time we realised our mistake, we were way beyond Bandel, another town further up the Hooghly which boasts of a Portuguese-built church dating back to 1599. Moral of the story: discussing extra-marital affairs leads you nowhere. We made a U-turn and took the next visible road turning left, and were soon on the historical Grand Trunk Road, travelling downstream alongside the Hooghly. The road, built by Sher Shah Suri, which runs from Sonargaon in Bangladesh right up to Peshawar in Pakistan via the fertile Gangetic plains of India, assumes the form of a narrow lane at many places in this part of Bengal. Only upon reading the various signboards — the signboard of the neighbourhood doctor's clinic, of the local grocery store, of the crowded sweet shop — did we realise that it wasn't the lane that was small; it was actually we who were crawling like an ants on the lap of history.

In hindsight, the debate turned out to be a blessing. Had we reached Chandannagar a little earlier, we would have been caught in the rains. We might have turned the car back and thought of returning some other day — it's a day that never comes. But right now the town was freshly bathed — all set to welcome us and also draw its residents out of their homes. It was time for their evening walk.

As far as looks go, the similarity between Chandannagar and Pondicherry is unmistakable. While Chandannagar has the river, Pondicherry has the sea — that's the only big difference. Though Pondicherry, having been the capital of French India, has far more French-built buildings on the waterfront than Chandannagar, the atmosphere that prevails in the evenings is strikingly similar: people out on their walks, young women commuting on bicycles, hawkers selling ice-cream and local savouries. There is definitely something French about women riding bicycles — it's a common sight in Pondicherry as well.

What is, however, definitely Indian is the urge to have a steaming cup of tea and something freshly fried when the air smells wet. And so, before walking the length of the Strand, we parked ourselves on a bench in front of the eateries that line the short road connecting the Strand to the Sacred Heart Church, built in 1875. The three of us had hot cutlets, both mutton and vegetable, followed by tea served in miniature earthen cups. The bill: Rs 25.

Chandannagar's modern history dates back to 1673 when the French obtained permission from the Nawab of Bengal to set up a trading post on the banks of Hooghly. Bengal was then part of the Mughal Empire. Over the decades, the traders went on to become rulers — now that's a familiar story, isn't it? In 1730, Joseph Francois Dupleix was sent from Pondicherry to take over as the new governor of Chandannagar; and under him the town developed and prospered so much that he was soon sent back to Pondicherry as the governor-general of French India. Dupleix is best remembered for his rivalry with Robert Clive of the British East India Company. In the end Dupleix lost and Clive won, as a result of which Pondicherry lost out to Madras and Chandannagar lost out to Calcutta in terms of their importance as towns.

And what if Dupleix had won? Perhaps this piece would have been written in French.

Dupleix's home, still intact, continues to be the most prestigious building on the Strand. It is under the protection of the Archaeological Survey of India: part of it is a museum and part of it serves as an institute where you can learn French. In the museum you still get to see Dupleix's four-poster bed — so tall that it could be climbed only with the help of a small wooden stairway that also stands preserved alongside the bed. Another landmark on the Strand is St. Joseph's Convent, a girls' school founded in 1861 by the Sisters of St. Joseph of Cluny. It continues to be one of the best educational institutions in the country and its alumni, today, is spread across the world. I get to see two of them on a daily basis — one at work, a colleague; and another at home, my wife.

Even as you gaze admiringly at these buildings while walking on the promenade, it is impossible to miss the sights offered by the other side of the Strand — that of the tree-lined river bank and the river itself, flowing serenely towards the mouth of the Bay of Bengal. And across the river, you see the chimneys of jute mills rising above the green vegetation, piquing your curiosity about what lies on the opposite bank.

A one-way ferry ride costs three rupees each. We got into a steamer and climbed to the upper deck with the intention of getting a view of the river against the receding town, but a man stopped us and directed us to the lower deck, where we sat face-to-face with the daily passengers — mostly office-goers returning home. One of them sensed our discomfort and remarked, “It will take exactly three minutes.”

It was precisely in those three minutes that night descended; and on the opposite bank, by a temple, rickshaw-pullers waited to take passengers up the darkened path. Since we had no particular destination in mind, we lingered around the temple and ate peanuts. The peanut-seller once worked in a jute mill that has now closed down — another familiar story, isn't it?

When we returned to Chandannagar, the promenade had turned into a venue for addas. Elderly people in small groups were plunged in discussions — one group was discussing Anna Hazare. Young girls were dismounting their bicycles to greet known faces. The hawkers were out in force — selling ice-cream, jhaal muri and paani puri.

On our way out, one of my companions suggested that we stop by at the legendary sweet shop of Surjya Kumar Modak. It was another way of saying — a trip is incomplete without dessert. There we gorged on freshly-made sweets: maal-pua, sandesh, rabri and rosogolla. Needless to say, food turned out to be the subject of discussion on the journey back to Kolkata — a subject that, if you are a true Bengali, is any day more interesting than extra-marital affairs.

Published in The Hindu MetroPlus, 17 September 2011.
Posted by Bishwanath Ghosh at 12:21 PM

You paint such a beautiful picture with words.