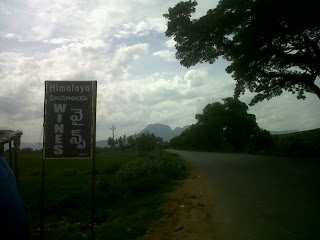 I don't remember since how long S.S. and I have been drinking together. Wait a minute, I do. It's ten years now. If drinking were a creative act, we would have both been celebrated members of the society by now -- the amount we have drunk together! But who says drinking isn't a creative act? In fact, it can be the most creative if done in the right company.

S.S., however, makes no fuss. Neither do I. As long as there is some water to pour in the drink, anything, just about anything, will do. Most of the drinking, all these years, happened either at my home or in the dingy, dirty bars of wine shops. Today neither of us goes to these bars for the same reason -- they are dingy and dirty. After all, there comes a time when you no longer do things that you did in the younger days and are better off with the memories of it.

But there was a time when we liked going to such places. I particularly liked it because here you met people who did not wear masks. They were what they were -- the labourers, the autorickshaw drivers, the small-time businessmen, the marketing executives, the medical representatives... And alcohol made them even more honest and human.

Very often, we would be approached by men in tatters. They would be holding out their alcohol-filled glasses and begging for some water. They would have managed to collect just about enough money to buy the alcohol, and had no money left to buy a pouch of water. When you are drinking out of habit and not as a social obligation, you always understand a fellow drinker's needs and compulsions. You are sympathetic.

But there is one sight I can never forget. Some years ago, S.S. and I were busy discussing 'office politics' over drinks when a bloodied hand clutching a plastic glass came in between us. One look at the man's face and I was horrified: he had a terrorised look on his face, his soiled shirt was coated with dust and the right sleeve was soaked in blood. He was begging for water.

There are countless such episodes I can recall if I try very hard, but right now they are as hazy as the previous night's antics under the influence of alcohol and I would rather let them remain that way.

But a few weeks ago, S.S. and I got together for a drink at a wine shop after God knows how long. Only that the wine shop was not in Chennai, but in a village in Andhra Pradesh, on the highway to Tirupati.

"I am free, man! Why can't I come with you?" S.S. told me when he learned that I was preparing to leave for a small town near Tirupati. "We could go in my car." So off we were -- the two old drinking buddies -- getting away from the city together for the first time. With each kilometre we travelled the smell of freedom grew stronger -- freedom from what, I was not sure.

At Thiruvallur, we lunched on freshly-fried Mysore bondas and Thums Up at a roadside stall. S.S. has a fetish for roadside food. Not that I don't, just that I am careful while making a journey. The man who was frying the bondas, obviously pleased with the number of bondas we ate, pointed to a road which he said was a short-cut to Tirupati. S.S., who blindly trusted the man's bondas, was reluctant to trust his sense of direction. I finally coaxed him: "Come on, man! This guy lives here. He knows better."

Obviously the bonda-seller knew better. Because even before we realised, we had crossed into Andhra Pradesh. S.S.'s eyes lit up when he noticed wine shops with Telugu signboards. For residents of Tamil Nadu who love to drink or who love their drink, every other state in India is a paradise. Tamil Nadu is the only state in the country where you don't get cans of Kingfisher beer (or any other beer) or Bacardi Breezers. In fact, you don't get anything in Tamil Nadu other than brands of hard, headache-inducing liquor that are unheard of in the rest of India. Why so -- no one seems to know or wants to know.

And so, we had entered paradise. "How about some beer, Ghosh?" S.S. asked me, overcome by glee. "May be when the next shop comes along," I replied. We were driving on a practically empty highway, cutting across lush green fields that looked greener under an overcast sky. And then, the first set of hills showed up on the horizon. The thing with hills is that they look very close but it takes forever reach them. As we drove on, believing they were just round the corner, a signboard came into view: Himalaya Wines. S.S. took his foot off the accelerator.

Himalaya Wines is the most picturesque wine shop I have ever seen or will ever see. On the face of it, it is just another well-stocked wine shop on the highway that is more eager to cater to commuters from the city; but in reality, it is a wine shop located in the middle of an unending stretch of green fields with the hills looking over. Its bar is nothing but a thatched roof shed where people from the nearby villages gather to drink. A thatched roof is all you can ask for in the middle of nowhere -- it was five-star luxury when compared to the dingy bars of Chennai which we once frequented.

We bought two cans of beer each -- S.S. bought Corona while I stuck to Kingfisher -- and settled at a table under the thatched roof. The attendant, seeing customers from the city, came running. We ordered omlettes and sundal. There was pleasure in every moment -- in holding the moisture-coated cans, in clicking open the cans and watching the froth form around the gaping holes, in tasting the beer that actually tasted like beer and not horse's piss.

We had just begun enjoying our beers when an elderly man, in crumpled clothes, walked up to us with his hand outstretched. "Oh no, not again," I muttered to myself, "and we don't even have water. We are drinking beer, can't he see?"

The elderly man came closer, his hand still stretched out. On his palm rested two bondas, and he was telling us something in Telugu. "What does he want?" I asked S.S. "We don't even have any chutney or sauce."

"Wait, let me find out," S.S. said as he got talking to the elderly man in Tamil. It so turned out that the elderly man was a farmer from a nearby village who was not asking for anything but was actually offering us something -- the freshly-fried bondas that he had bought from a roadside stall before walking into the wine shop.

"Since you are an outsider, he considers you to be his guest," the attendant, when he returned with the omlette and sundal, explained. "He has been coming here for years, but I have never seen him offer food to anyone."
Posted by Bishwanath Ghosh at 11:30 PM

I live vicariously through every post of yours, there are experiences that I will never have as a woman and its a joy to live thru them via ur words! Keep writing...

You took me to an exotic journey, which in some ways, was better than a wine-tasting tour in the vineyards.

Horse-piss and bad alcohol make a very good comparison, even for those, who have tasted neither. I remember having breakfast once with a colleague, who complained about the quality of the "onion flavored" bagel. He took a bite, made a disgusted face, and said, "It feels like kissing the butt of an onion."

To this day, I haven't managed to figure out if he meant that literally, or figuratively.

Vineyards surround my place in Burgundy but I seldom drink…. at the most a few glasses of beautiful red wine because it is a must during local festivities or to accompany certain dishes. I am jealous Mr Ghosh, because it seems that you have reached the abode of Gods. The board on the roadside is a clear sign; even the word Himalaya has a special glow. From that side of the world, I wonder if you perpetuate the ritual of drinking Soma, your local ambrosia supposed to lead to immortality. I have heard that the ritual is still prevalent in South India and that the plant enhances alertness and awareness. Is that your secret for describing so well the mysteries of ordinary life? Could you be the writer-god of small things?

hey sorry if I am going off track. This reminds me of Chai Chai. Plus, I feel an old world charm to the ambience you have drawn here. Don't ask me why:)

Oh my god, there's so much useful info above!