Fashion TV And I

Shortly before I decided to move to Chennai — the decision was taken in the year 2000 — I read a report in Outlook about how the conservative city was changing and becoming more hip. To support its claim, the report had cited the opening of a new pub called Hell Freezes Over, or HFO, where the young and the happening were descending every night to party until the wee hours.

The report had contributed, even if in a small way, to my decision to move to Chennai from . My salary in Chennai was going to be Rs 18,000 per month; whereas in , even with a salary of Rs 15,000 or even less, I was going to the discotheque every now and then. I imagined myself sitting in HFO almost every night, buying drinks not only for myself but also my new friends and shaking a leg with them.

Fantasy and reality, however, rarely see eye to eye. Once in Chennai, my evenings were spent in filthy bars that are attached to wine shops. To know about those experiences, click here. As for HFO, I visited it precisely twice during the years it remained open in the city.

After having three drinks in a filthy bar and dinner (usually parotta and fried eggs, from a roadside stall), I would come back home, read and write (longhand, because there was computer or internet at home back then), and because there was no internet, I would also watch TV before going to sleep. I had two favourite channels at that hour, SS Music and Fashion TV.

SS Music had a midnight programme called Hot, Hotter, Hottest (an expression often used to describe Chennai’s weather), whose intention was to arouse the male audience. It must have been quite a task for its producers to scan the archives, on a daily basis, and select only those songs that took more pride in the cleavage than the composition.

Once the programme got over, I would switch over to Fashion TV and subject myself to the unending sight of skinny models walking down the ramp in locations so remote, culturally and geographically, from Chennai. I would keep watching until I had seen enough topless models — those days you saw plenty of them. In between fashion shows, the channel would also show footages of parties held to celebrate the opening of the F Bar (nightclub promoted by Fashion TV) in some Western city or the other. Back then I believed that if one got invited to such a party, one had arrived in life.

Last Thursday, when I walked into office, I found a black, diamond-shaped card on my desk waiting to be opened. It invited me to the opening of the F Bar in Chennai. On the one hand the invite didn’t mean a thing, because a new nightclub opens every other day in Chennai and such things no longer interest me; but one of the other hand the invitation, seen in the light of my belief during my younger days, meant a lot. And so I showed up at F Bar on the night of its opening, and also had the picture below taken — just to remind myself of the old times when, in the absence of internet at home, I would watch Fashion TV. Chennai seems to have come a long way, and so have I. 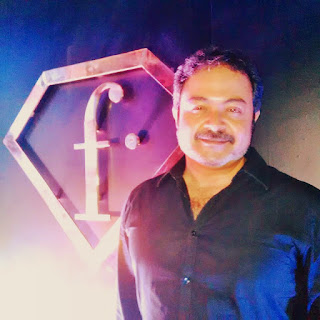 Posted by Bishwanath Ghosh at 2:52 AM

Lovely Post... When FTV first started in India, I also used to watch it night after night... Also I remember watching another programme named "Bikini Destinations" in some other channel...