And So Television Came To India 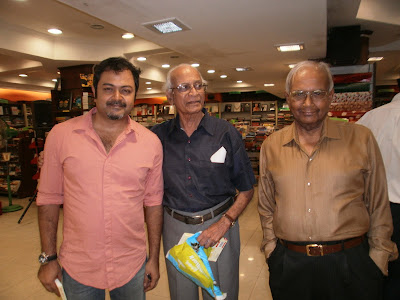 This picture was taken last evening, during the Chennai launch of Urban Shots. The man to my left, in deep blue shirt, is P V Krishnamoorthy. He is 89. Let me tell you his story. I wrote about him in the paper sometime ago, and much of what follows has already been published.

Krishnamoorthy was born in Rangoon in 1921. There, he grew up on the same street where the Bengali novelist Sarat Chandra Chatterjee lived. As a young man, he rubbed shoulders with legendary singers like Pankaj Mullick in Kolkata. Even today, he plays Rabindra Sangeet on the keyboard with such flourish and enthusiam as if he had composed those tunes himself a few hours ago.

"Rabindra Sangeet must also adapt to the changing times, or else the younger generation will not be able to relate to it," he told me I went to his R.A. Puram home to interview him. "I am sure Gurudev won’t mind," he gestured to the portrait of Tagore hanging on the wall and winked.

Krishnamoorthy saw television in India being developed from scratch and later went on to become the first director-general of Doordarshan when it was formed in 1976. He may be leading a retired life today, practising his Rabindra Sangeet on the keyboard gifted by his son, but he is a repository of stories through which one can trace the birth and growth of TV in India. It all began with a trade exhibition at the Pragati Maidan in Delhi.

"I think it was 1957 or 1958. Philips had displayed a closed-circuit television in its stall. But they found it too cumbersome to ship the equipment back,so they gave it to All India Radio for a nominal fee. We set it up in a small room on the fifth floor of Akashvani Bhavan. There was no air-conditioning then, so we had to place ice slabs to keep the room cool," Krishnamoorthy recalled.

So, the equipment left behind by Philips became India's first TV station, which became operational in September 1959, broadcasting over a radius of 25 km. It beamed educational programmes,watched by a very limited audience on UNESCO-donated sets. Krishnamoorthy,who joined AIR as an announcer in 1944, was then sent to the US to study how TV can aid education.

"It was an experimental service for a long time. The government did not seem to be serious about TV," Krishnamoorthy told me. "It was Indira Gandhi, when she was the information and broadcasting minister, who said enough is enough and that we should get serious about it."

Still, TV remained a tool only for social education, till a full-fledged station was opened in Mumbai on October 2,1972,with Krishnamoothy as its head. Germany had already switched to colour TV, and it gave away its black-and-white equipment to India. The inaugural function was almost a disaster. The Maharashtra governor,the chief guest, almost forgot to turn up; Bismillah Khan, after waiting for the governor for long,disappeared for namaaz; Asha Parekh,who was to perform on stage with dancer Gopi Kishan, stepped on a broken soft drink bottle; the central camera collapsed. But none of these was noticed on TV and the launch was a success.

Krishnamoorthy, however, had a tough time explaining to the Hindi film industry that TV would not eat into their viewership. Among the filmmakers who were not entirely hostile to TV was Ramanand Sagar, who eventually exploited the medium to serialise Ramayana.

One day, while Krishnamoorthy was sitting in his office, a young,dusky woman barged into his room, crying foul. She had just auditioned for the job of a news reader and had been rejected. Krishnamoorthy got a third party to audition her and she was selected. But she didn't last long as a newsreader because director Shyam Benegal saw her on TV and offered her a role in his film. She was Smita Patil.

Years before that, in 1957, when Krishnamoorthy was the station director of AIR in Cuttack, he spotted a young man waiting at the gate one morning. The young man's father was a wrestler and wanted his son to be a wrestler as well. But the son wanted to play the flute,and had approached AIR in Lucknow. The station director there dispatched him to Cuttack, where Krishnamoorthy not only bought him a set of 12 flutes from Kolkata but also let the homeless boy stay in the AIR station for a year. The boy did not look back: he went on to become Hari Prasad Chaurasia.

The most gratifying moment in Krishnamoorthy's own career came in 1975 with the SITE,or Satellite Instructional Television Experiment,project,the brainchild of Vikram Sarabhai,which entailed using a US satellite to reach 2,400 most inaccessible villages in India. Krishnamoorthys job was to produce 1,320 hours of programming, in various regional languages. "It was the biggest, boldest experiment ever," he told me.

The project kept him busy in the remote villages of Bihar, Orissa and Karnataka,so much so that he was missing from Delhi most of the time, even when Indira Gandhi decided to separate TV from AIR and launch it as an independent body called Doordarshan in April 1976 and make Krishnamoorthy its first director-general.

"That's how I escaped the Shah Commission, as I was never there in Delhi. They had appointed an additional director-general to do the dirty work (during Emergency)," he laughed.

But there was one dirty job Krishnamoorthy had to do: to get the Raja of Mandi vacate his palace so that the studio of the newly-created Doordarshan could move in. "He was refusing to move out. Then V C Shukla told me, 'Tell him to vacate or else we will acquire his property.' I conveyed his message to the Raja and he vacated. We had to pay him, of course," recalled Krishnamoorthy.

The palace of the Raja is today known as Mandi House, the headquarters of Doordarshan.
Posted by Bishwanath Ghosh at 1:58 AM

Thanks for the recap ..nice read

Wow! It's so amazing to read all this! And he has been a medium to channelise so many successful careers!

What a nice blog. I am happy to read there success history. Thanks

Nice post. I happened to watch an interview of Mr.Krishnamurthy some time ago while channel surfing.I think, he had said that his greatest moment was when Mrs.Gandhi spoke to Rakesh Sharma and it was telecat live on DD.

Dear BG,
I already knew a fair bit of the reminiscences of Mr. Krishnamoorthy that you have written about. He had written a similar Op Ed for the Express. It is worth reading both – each has some nice bits missing in the other (http://expressbuzz.com/Opinion/Op-Ed/the-initial-days-of-doordarshan/103552.html).

One line particularly struck me "Rabindra Sangeet must also adapt to the changing times, or else the younger generation will not be able to relate to it". How true, but if you meet him again, tell him that it is already happening.

It is true that some experiments (in my humble opinion) have gone a bit overboard (http://www.youtube.com/watch?v=Sp2xgofGjr4), for most of the time it is indeed glory days come back.

Debabbrata Biswas must be smiling down from heaven (many of his recordings were banned by Vishwa Bharati for being experimental, and it is said that this hastened his early demise).

Once upon a time I used to feel heartbroken about Pancham's songs being remixed. But now I realise that for the younger generation, the remix can be the route to track the original in case one is interested.

Take my case, for instance. I grew up in Kanpur and have lived all my life outside Bengal. Once, in Delhi, I met three Bengali sisters who sang as 'Concord Trio' (Concord being the name of the recording company) and had come to perform at Chittaranjan Park. I was swept off my feet by the chorus and the songs they sang. They were all remixes of popular adhunik songs (which I did not know then). I bought all their cassettes, and gradually worked my way back and hunted down the originals.

Today, I listen to the originals of Salil Choudhury, Sudhin Gasgupta and R.D. Burman -- but the journey began with the remix!

For that matter, even the biggest of composers 'remixed' folk and Western music :)

Great reading this all over again Biswanath! Have shared the link with the family...
And all the best for your next book.
indu

Thanks for the remix of your ealier article on me.

It might interest readers to know that New Theatres had difficuties in convincing Viswa Bharati that Saigal could render Rabindra sangeet in the bengali film Paichai. Vishwa Bharatirelent.
was concerned about Saigal's Bengali pronounciation !! His rendering of Aj Khelar Bangar Khela was my favoutite.Pankaj babu and Rai Chand Boral had to do a lot of convincing before VB would relent.

Incidentally recently the Manabendra Smaraney felicitated me for my so called contributions to adhunik bangla gaan!Manabendra Mukerji was a great exponent of Nazrul Geeti and Raag Pradhan. Manabendra had sung some of my compositions.Pardon my self publicity:-).
I am waiting for the day when Bengali kirtans wil be sung in concerts all over India like Marathi abhangs. P. V. K.

Sorry, minor typo corrections to above comment!The first para should read as:
" It might interest readers to know that New Theatres had difficuties in convincing Viswa Bharati that Saigal could render Rabindra Sangeet in the Bengali film Parichai. Vishwa Bharati
was unduly concerned about Saigal's Bengali pronounciation !!"

Two unexpected comments (responses), one much more so than the other :-) That made my day.

So lovely to hear so much about my very talented,multi faceted grand uncle ----whose compositions I still enjoy singing! Rama.

thanks 4 the information.i have been searching 4 this but didnt get from anywhere