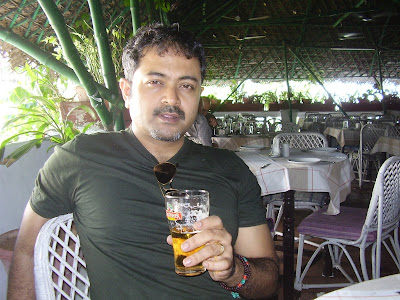 I wouldn't be exaggerating if I say that I feel like a middle-class, middle-aged man from Uttar Pradesh who has just discharged the responsibility of marrying off his daughter. He had been carrying this burden from the day she turned 20: will I find the right match for her? Do I have sufficient money to arrange for an impressive wedding? Will I be able to make the arrangements single-handedly?

Now that burden is off his chest. There is, however, something new that bothers him of late: will the in-laws treat my daughter well? But then, his inner voice tells him, "Look, you have done your duty. Now let God take care of the rest." Relieved, the man goes to sleep. I, however, went to Pondicherry.

I am no authority to talk about writing books, considering that I have none to my credit so far, but that's how I felt when I turned in the completed manuscript to my editors last week. Writing a book, just like marrying off a daughter, is like pursuing a dream. In both cases, personal ambition and prestige are at stake. And the anxieties don't just end with the wedding. You keep worrying about the acceptance. You never know whether your reader will be the kind variety of in-laws who welcome you with open arms, or the harsh variety who consider it their birthright to find faults. That's the nail-biting stage I am in right now, and that's why the escape to Pondicherry.

Walking on the streets on Pondicherry has always made me wonder why weren't colonised by the French instead of the English. We would have automatically inherited the fine rt of appreciating good wine and an impeccable sense of dressing from our parents and, as a result, gained automatic entry into high society in India today. But since we were colonised by the Brits, we are required to be good in studies, do well in exams, earn prized placements, earn a respectable designation and a salary and eventually earn a name in a society that doesn't consider you sophisticated enough unless you know your wine and dress well enough. Wouldn't it have been simpler to be the subjects of France, so that you could inherit sophistication instead of acquiring it after years of labour?

In any case, I fail to see the difference between an English engineer who earned 50 pounds a month at the time and a French writer who had 50 female fans. While the former toiled all his life, hoping to marry a decent woman someday, the latter fucked his way to glory, sleeping with dozens of such decent women and knowing fully well that they would come to his rescue in case he had no money to buy food.

Writing is one area where you can't fault me for being partisan towards France: literature would have been poverty-stricken today but for the broad-mindedness of the French. It was the accommodating spirit of Paris that produced literary giants like James Joyce and Hemingway, not to mention controversial writers of the times like D H Lawrence and Henry Miller, who would have remained unknown if publishers in France didn't have the balls to print their works.

For a lay Indian like me, living in Chennai, Pondicherry is as good as Paris. I don't know how Paris must have felt like in the 1920's and 1930's, but am certain it must have been quiet enough then as the French town of Pondicherry today to nourish writers like Joyce and Hemingway and Henry Miller. Had Paris of the 1930's been today's Pondicherry, you would have had Hemingway bumping into Joyce at Satsang, one of the finest French restaurants in the town, or Henry Miller lingering with friends at Rendezvous, another restaurant that serves continental food.

I have always loved the quiet of Pondicherry. But this time, it was the ghosts of Hemingway and Henry Miller that made the lovely little town more endearing to me than ever before. They sternly reminded me that I might have married off the eldest daughter, but there were many more daughters waiting to be married off once they reach marriageable age.
Posted by Bishwanath Ghosh at 12:25 AM

That is Rendezvous, my favourite place there.

When is the release and where is the venue? Waiting to see our daughter-in-law. Please send her here soon. Because she is your daughter cannot be unacceptable.

I hope you remember that I wish to be the first to 'bless' your daughter... I am ready with the aarti tray laden with diya, agarbatti, mithai and what-not!

Dada, I've started drooling thinking of reading your book.Please keep your fans posted on its progress. A few teasers, snippets or a chapter or two would be like nectar for a dying soul.:-)

The Ugly One said...

hey, great news. i hope to finish mine by this year end :)

ghost town :-)
i thought you had a book on travelling to your credit!!

Interesting.... bt it seems like from ages i am waiting for your book to be completed. (write fast....lol)

Jokes apart, congrats! i am very happy for you. May this will bring the fame and success in ur life.

Wishing all the best for your daughter...

Oh WOW Bishwanath, looking forward to picking up a copy.

This was a lovely post. You have an amazing way of putting sentences together. Especially the metaphors!

Do let us know when the book is out, so we could relish reading it.

Am looking forward for the daughter.. and like as i asked.. signed by you.. :)