Letter From The Land Of Kama Sutra

By the time I made it to Khajuraho, the cows were returning home. Every few kilometres, they would be lording over the road, sometimes in dozens and sometimes in hundreds, marching like weary battalions. Their commander would invariably be a sun-beaten old man carrying a twig for a weapon. On a normal day, I would have stepped down from the car to savour this most magical hour of a North Indian village: it is called the cow-dust hour, or godhuli, when the dust raised by the returning cows mingles against the setting sun, with the smoke rising from freshly-kindled mud ovens. But right now, the setting sun was bad news for me.

Throughout the five-hour journey from Jhansi, I had been visualising myself admiring the erotic sculptures and taking pictures. But once in the town, I found myself looking for toothpaste, a toothbrush and shampoo. The hotel gave me Medimix soap and a towel, and wearing that towel I settled down for a drink. I wasn’t carrying a book, so I killed time by going through the menu card in the room again and again. The card was bilingual: English and Korean, and there was a separate category of Korean dishes, one of them being the ‘Korean veg. paratha.’ I did not realise when I fell asleep but when I woke up, I remembered the ancient saying: Whatever happens, happens for the good.

Another gardener, this time a friendly young man, happened to be passing by and he took over from the old man. Perhaps he could see through my interest, and he became my guide. “Come, I will show you something. Come down.” He took me to the side panel of the podium and with the flourish of an artist unveiling his most precious work, waved his hand, “Look here! Kama Sutra!” For a moment I was stunned, and the next moment I felt a little embarrassed, and then I decided to look at the sculptures as a work of art. But it was impossible not to think of the sex. The acts were taking place in every conceivable manner, and it was not always between a man and a woman. “Look, horse,” the man said. Oh my god!

He took more pictures for me and excused himself with a namaste. I went over to the other temples — the Kandariya, Jagadambi, Chitragupta and the Vishwanatha. The designs are similar: each is erected on a high podium, and has a porch, a vestibule, a mandapa and the sanctum. If time has a smell, you could smell it inside these temples. When you stand alone in the sanctum, it almost feels as if the Chandela kings, who built the temples a thousand years ago, had performed an elaborate ritual just the evening before.

I sat for a while on the steps of the Vishwanatha temple and watched a squirrel enjoy its breakfast. Suddenly, a whisper from behind. “Soovar waala dekhna hai?” (You want to see the one with the boar?) It was the young gardener. I followed him inside the temple and on the inner wall above the entrance, I saw a boar mounting a woman. He pointed to another sculpture right on the entrance to the sanctum! A man and a woman in what they call the doggy pose.

He did a namaste and disappeared again. By now the sun had risen high and I walked across the lawns. A group of Westerners had gathered around a smartly-dressed guide and were listening to him. The guide spoke fluent English and from a distance I could catch the words “bestiality”, “homosexuality”, “vices,” “illusion and delusion.”

I came back to the Laxman Temple, to take one last proper look at the carvings on its podium — the most scandalous ones. Two foreigners — a man and a woman — came up and I could see they wanted to burst out laughing on seeing the orgies. But they wore dignified smiles and moved on. An Indian family arrived — two men and three women. The women, who looked like housewives, broke into giggles. The men discussed dynamics of the complex postures and that made the women giggle even more. One of them mock-admonished the men: “Don’t look at them in a dirty way.” Another woman arrived — Indian and alone. As soon as she saw the images, she pulled out her camera, but the moment she saw me watching her, she put the camera back. I decided to leave.

If a man mixes rice with the eggs of the sparrow and having boiled this in milk adds to it ghee and honey and drinks as much of it as necessary, he will be able to enjoy innumerable women.

I wondered if I should have been born a thousand years ago. 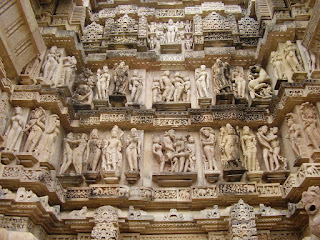 Posted by Bishwanath Ghosh at 8:31 AM

I really liked ur post, thanks for sharing. Keep writing. I discovered a good site for bloggers check out this www.blogadda.com, you can submit your blog there, you can get more auidence.

Hey, you have a great blog here! Keep up the good work. Nice for share this article. This is Really nice tutorial. That's one thing I'm really looking forward. I'm definitely going to bookmark you! Looking forward to reading more from you.
Thanks and good day for You. Till next time.

Who knows where to download XRumer 5.0 Palladium?
Help, please. All recommend this program to effectively advertise on the Internet, this is the best program!

capri ... how many catches so far hunter..... with high esteem SM
-sam

I remember every word of this chapter. :)