The City Of 'Enthu'

One really feels sorry for the Bengalis. For 361 days they wait for something that lasts only four days. So when Durga Puja arrives, they are more sad than happy. As my car snailed out of the Kolkata airport on the evening of Sashti — the first day of the Puja — a caller whined to the host of Meow, a new FM channel dedicated solely to women: “My heart is already so heavy. Soon it will all be over.” I decided to make the most of it while it lasted.

But it poured heavily throughout Saptami morning. I won’t be surprised if an over-emotional Bong composed a poem on how even the heavens were crying because Ma Durga would go away in a couple of days. Anyhow, the rain gods decided not to mess with the spirit of Kolkata and the skies cleared by the afternoon. I was set to celebrate my first Puja — or Pujo — in Bongland. It began with the mandatory visit to the neighbourhood pandal in Salt Lake, which was modeled after the fort of Jhansi. Statues of Lakshmibai (atop a horse with her child strapped behind her) and Mangal Pandey welcomed visitors. The artistes didn’t have to work their imagination to create Mangal Pandey: he looked exactly like the long-haired Aamir Khan. Bhog — or the community feast — was being served: khichuri (rice and lentils), labda (mixed vegetables), cabbage, chutney, paapad and rasagolla. (The taste of the khichuri and labda lingers on a Bong’s taste-buds throughout the year).

Even though a Bong’s favourite destination after a hearty afternoon meal is the bed — for a couple of hours sleep, that is — we decided to check out another pandal in the area. It had been in the news for copyright violation. The pandal was a lookalike of Hogwarts Castle, and the organisers of the Puja in the area had received summons from the Delhi High Court. The summon, which ran 394 pages and mentioned J K Rowling and others as the plaintiff, said they could carry on with the Puja after paying a fine of Rs 20 lakh. Obviously the matter had been settled, because the pandal was in place and attracting thousands of visitors. The young ones posed before the statue of Harry Potter, who stood right in front of Ma Durga.

The evening was fixed for Maddox Square, supposedly the most happening pandal of Kolkata. Happening, because the most happening women in the city supposedly come there — in miniskirts and all. All I saw was a crowd of some 50,000 people. I was too busy feeling my wallet all the time to notice the women. And it is pointless to notice women when you go pandal-hopping with your wife and her extended family.

Day Three is Ashtami, the big day. We went pandal-hopping in North Kolkata, the nucleus of Bengali culture. Manicktalla, Kasi Bose Lane, Kumartuli and many more. These are places where you see trams rubbing shoulders with hand-pulled rickshaws, where roadside food is famous and where people don't frown at roadside food — they relish it. This is the Calcutta that the West is familiar with — filth coexisting with affluence, 19th century coexisting with the 21st century. Culture is the leveller.

Day Four is Navami, the last day. More pandal-hopping, this time in South Kolkata: Jodhpur Park, Babu Bagan, Selimpur. Don’t go by the names: these are places where Bengalis dread to go because of the crowds. But when you go there, you find the entire population of Kolkata descending on the narrow streets of these localities, waiting in the queue interminably for a two-minute glimpse of the pandal.
Stampede is always a possibility, but it never happens. Bongs, after all, are bhadraloks — decent people.

Enough pandal-hopping. Time to party. So straight from the pandal, we headed to Venom, the most popular disco in Kolkata these days. It is the autumn of 2007, but Kolkata was dancing to Summer of '69. And the time was 1 am, when Chennai and Bangalore would have long gone to sleep. I shouted at the top of my voice to ask the DJ if he had any R.D. Burman songs, and he waved a ‘no’. The shift changed and a new DJ took over, and his favourite seemed to be the new craze, Hare Ram Hare Ram, Hare Krishna Hare Ram (from Akshay Kumar’s new release Bhool Bhulaiyya). He must have played the song half a dozen times. A couple of hours later, yet another DJ took over. This chap had read my mind even without seeing me, and off came one song after the other — the remixes of 1980s hits of R.D. My evening was made.

It was 4.30 when we left, and people were still walking in. Someone suggested, “On the way back, can we stop by at the Park Circus pandal?” Another rebuked her: “You’ve got some enthu!” ‘Enthu’ is the short for enthusiasm: Bongs use it so often that it sounds more like a Bengali word. I should know it by now, after the four days of ‘enthu’. 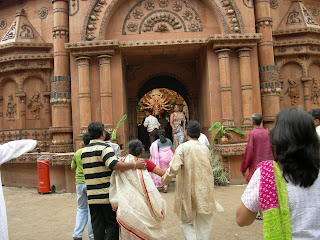 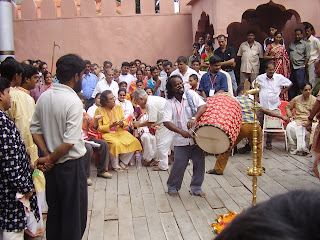 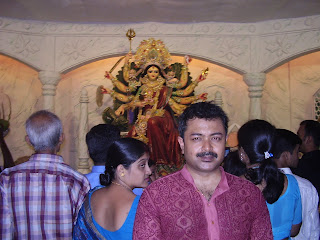 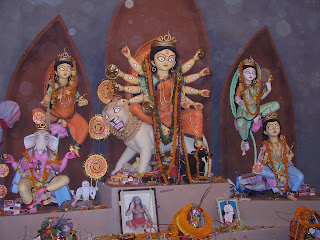 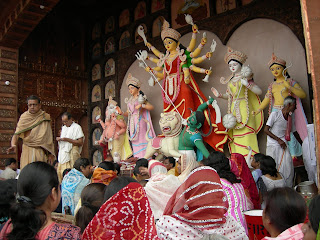 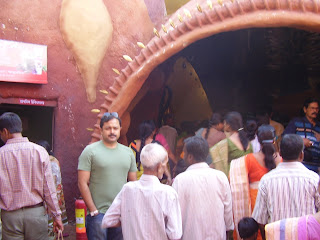 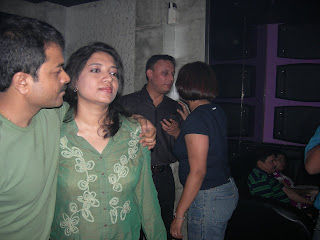 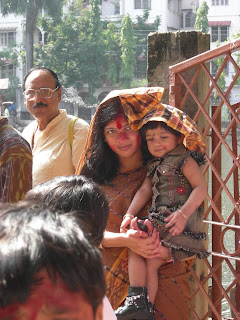 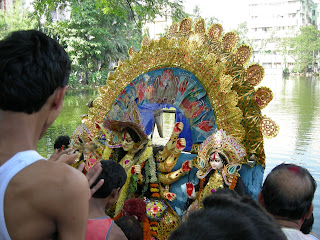 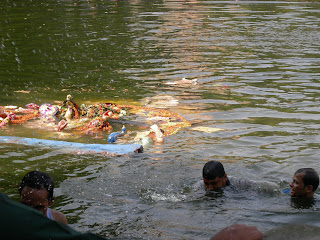 Posted by Bishwanath Ghosh at 1:20 PM

Next Durga Puja I have decided to be in Kolkata. Graphic details of the place makes me feel enthu too.

Is that all, no, I need to say the city never dies i guess, heard Kolkata to be one of the dirtiest places, but going by the photos, it seems to be clean if not spic and span.

I think it was put, but still does not bring out the actual enthu and festivity of the Kolkottans during the puja days.

Not related to this post - Kudos to you guys for the wonderful job in today's Sunday EXpress.

PS: My dad took the supplement and gazed through the contents of the first page. Realizing that I was around, he put it down casually. Later I noticed him finish off the edition in my absence.

your article captures the beauty of the festivities like in a video ... thanks for all the visual imagery ... i can well imagine the mini skirts and fat legs aka rani mukherjee ...

yeah ... not every little thing in this world can be enjoyed with others in tow ...