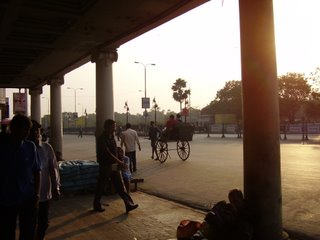 It’s past midnight, when the average Bengali has been asleep for hours — the quilt firmly secured around his neck to protect against the January chill — and dreaming of social change.

But in Shisha Bar, one of the poshest nightclubs of Kolkata, the evening is just warming up. It is a weekday and people are trooping in late, and it is 12.30 by the time we hit the dance floor.

My energy comes mainly from deprivation —- in Chennai you don’t know, at any given point of time, whether a nightclub is functioning or has become the victim of the city/moral police. I am, however, clueless about the source of energy of my fellow rice-eaters. Perhaps it is the quest for good life: Bongs love, rather relish, the good life, and for their Gen Next, nightlife seems to be part of the package.

No one in the gang whines as we hop from one hangout to the other — from Park Hotel’s Someplace Else and then Roxy to the newly-opened Venom and now to the Shisha Bar. And while at Shisha, we make plans where to go next.

After dancing for a while, I need to go to the rest room. As I make my way through the dancing couples and crowded tables, a question springs to my mind: which city am I in? For a few moments, my mind goes blank — much to my horror. I suddenly find myself in a nameless place — it could have been anywhere in Chennai or Bangalore or Delhi or Bombay.

There is no one else in the rest room except a young man, who is gripping a mobile phone between his neck and an ear as he relieves himself. “No, no,” he says in English, “not 10 am your time, but 10 am IST.” Then, after a pause, he tells the person on the other end with trademark Bengali sarcasm: “Luck? Aamar luck to kuttar luck (Luck? My luck is as good as a dog’s)!” Ah, I am in Kolkata. But for such region-specific sarcasm and expletives, it would be very difficult to tell one city from another in a globalised world.

Kolkata has been celebrated in the West for its poverty and squalour. But standing at Park Street in the evening, with the cold New Year breeze brushing your cheeks, you could be in London: well-dressed, good-looking people walking by or having coffee in one of the restaurants with huge windows, tastefully-decorated shops, handsome buildings, the tolerant traffic.

The darkness and the pleasant weather had put a blanket over the poverty and had transformed Park Circus into Piccadilly Circus.

For a pilgrimage to the era when India was remote-controlled by London, it is mandatory to pay a visit to Flury’s, where you can spend hours discussing anything from politics to sex over tea and pastries. But the place was renovated a couple of years ago, and these days you could spend hours waiting to get a place there.

We waited for a while in the swank new Flury's, but soon moved across the street to The Tea Table, or T3, where the ghost of the old Flury’s resides. Even the furniture was shifted from there. I had Darjeeling tea, omelette and toast, and a rum pastry. After which I lit a cigarette — for the sheer pleasure of being able to do so without attracting frowns from neighbouring seats. I haven’t had such a wonderful evening in a long time.

At a music shop in City Centre, a sprawling mall in the Salt Lake area, I was looking for some albums of Salil Chowdhury. When I named a few albums and asked the attendant if they had any of them, a voice from behind replied: “Aagey cassette aashto. Akhon aar aashena (Earlier they came in cassettes. Now they’ve stopped coming).” I turned around: it was a Sardarji, the owner of the shop.

Postscript: I was all set to return to Chennai with nice stories about Kolkata when, on the final day of my visit, the Opposition parties led by Mamata Banerjee’s Trinamul Congress, suddenly called for a 24-hour bandh. I ended up driving around empty streets and roaming around an empty New Market. Some things will never change in Kolkata. (The picture shows Chowringhee on the bandh day).

Posted by Bishwanath Ghosh at 11:43 AM

thank you for the post, for through it, i had my own 'moments' in the city of joy...i love the city, and had also left a comment about it in your earlier post (bytheganges,blogspot.com)

it seems, like everything else, that cal has changed a lot too, for most of the places seemed unfamiliar to me. then again, i'm not at all the night club types, so i wouldn't know even if i went again

oh, and welcome back to chennai - for loads of 'sarkarai pongal' :)

PS: the thought of smoking a cigarette without attracting too much attention sounjds so cool, and i experienced it when i spent a brief holiday in the city :)

The streets look like the streets of kerela after saddam hussein was hanged. And yes, kolkata needs to breathe too.... agree??

Some things will never change in Kolkata.It should never. Thatis why Kerala and West Bengal still have 'something', which other states don't.

now that GURU is released, does it show your office? Is the printing press shown in the movie Indian Express office?

And Nilu is writing for Indian express. Have you seen him anywhere? What's he like?

Thanks , very entertaining and a new perspective is given to me. Enjoyed your piece...

Ah thats a part of india im yet to discover ;) i've always told ppl - in india the mix of wealth and poverty is mindblowing - in one corner the jewelery shops will be brimming with business and day of the year and right down the street there will be street urchins wandering the streets

Have you seen the new India search engine www.ByIndia.com they added all the cool features of popular products like MySpace, YouTube, Ebay, Craigslist, etc. all for free to use and specifically for India. Anyone else try this yet?

I visited Kolkata after a while recently, and bought quite a few CDs from the Sardarji at City Centre. I was impressed with the knowledge the guy had about Bengali music.