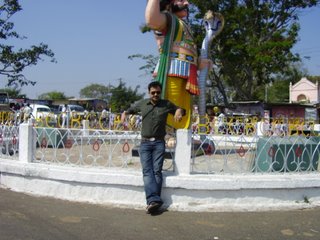 I don't believe much in Gods, but then.

About two months back I was in Mysore, to get the feel of the place so I could write a piece on R.K. Narayan's 100th birth anniversary. I went to most places in the city, including Chamundi Hill, which finds mention in Narayan's stories. The drive up the hill was scenic and peaceful, but as I was about to reach the top, my mother called. The moment I took the call my car took a bend and the signal got cut. I called back. No signal. Mom called again, and the line got cut. Panic set in. The moment I reached the top, I forgot everything else and looked for a corner where the signal was strongest. I got through to home.

Mother had called to whine: it was one of those Didn't-I-tell-you sort of things. I lost my cool. In the middle of a full-fledged argument, I sought to light a cigarette to calm myself, but in the process dropped my camera. The flap opened, exposing the film. Should I have cried? Instead, I pulled out the film in anger. It turned out to be Draupadi's saree: never-ending! My Mysore pictures had gone. I discreetly dumped the film behind one of the stalls and bought a new roll. But the sun had gone down. There was no option but to return. "How about a glimpse of Chamunda Devi?" a voice inside me asked. "Fuck it!" I replied and walked towards the car.

Two days ago I found myself in Mysore. Was it Chamunda Devi? Anyway, I didn't take chances this time and went to the temple, bought a special ticket for Rs 20 and had a glimpse of the goddess that had blessed Narayan. And the day I went happened to be Friday, which is supposed to be the day to be there -- at least the vendors selling flowers and kumkum told me so. And this time I took my digital camera and proudly posed around the place.

Posted by Bishwanath Ghosh at 7:01 PM

The temple is dedicated to Goddess CHAMUNDI and hence is known as the CHAMUNDI TEMPLE atop the Nandi hills and not CHAMUNDA . Please note the error in your post . :)